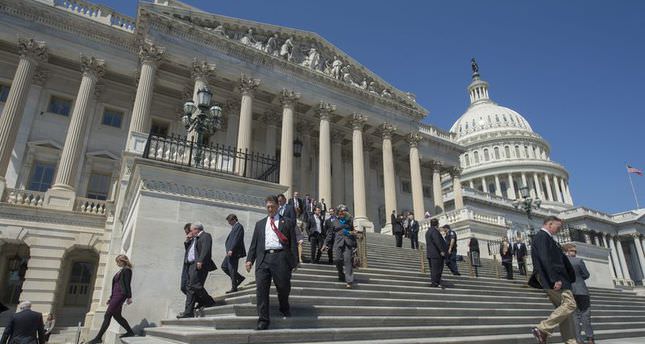 by Ragıp Soylu
Jun 27, 2014 12:00 am
A controversial anti-Turkey bill passed through the U.S. House of Representative's Committee on Foreign Affairs on Thursday after a week following pressure from the Turkish government, weakening Turkish-American relations in a time of regional crisis in the Middle East.

The Turkey Christian Churches Accountability Act directs the Secretary of State to report annually to Congress until 2021 on the status and return of confiscated or otherwise unreturned Christian churches, places of worship and other properties in or from the Republic of Turkey and in Northern Cyprus. The bill describes Northern Cyprus as a land occupied by the Turkish military.

Aram Hamparian, the executive director of the Armenian National Committee of America, praised the move and congratulated senior members of the committee, including Chairman Ed Royce, a Republican congressman from California, which has a considerable Armenian population, who also sponsored the bill. The Armenian American lobby has conducted a large campaign to gather support for the bill within the committee.

Turkish officials said that despite their lobbying efforts and their own interactions with the representatives, they had failed to block the progress of the bill. "Congressmen tend to seek more support from their constituencies in upcoming congressional elections this fall. We can say that the Armenian [American] lobby was successful merely because of elections politics," a Turkish official added.

In a statement released by Turkish Foreign Ministry it was said that "while the clear and concrete steps that Turkey has taken for the improvement of the rights and freedoms of all of its citizens, including for the non-Muslim minorities are evident; attempts by anti-Turkish circles in the US Congress, driven by domestic political considerations, to push such unconstructive and baseless initiatives are unacceptable. That these circles have focused on the heritage of a single religion, and have neglected negative developments occurring at the expense of other religions and their heritage is inconsistent with universal values and contrasts starkly with the multi-culturality of the United States."

It is not clear whether the bill will be discussed in the general assembly. Turkish officials vowed to work against the bill, and Turkish American lobbies in Washington and New York are disappointed by the result.

Ali Çınar, a well-known name within the Turkish-American community and former head of the Federation of Turkish American Associations, said that Turkish people must meet federal and local representatives to prevent a further deterioration of relations between the two countries. "We will meet federal officials this summer and work to convince them not to support these bills," he said in an email being circulated within the community.