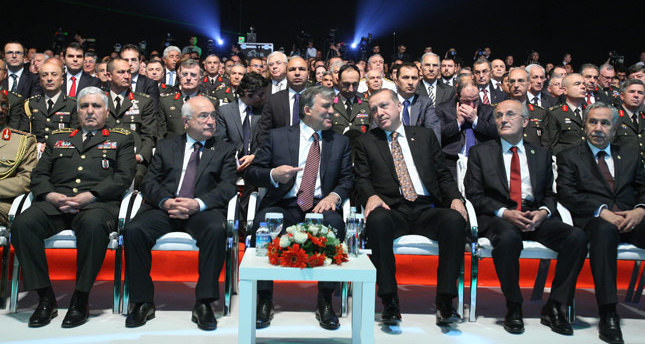 by Associated Press Jun 29, 2014 12:00 am
Turkish President Abdullah Gül said he would not seek a second term in office, further raising the likelihood that Prime Minister Recep Tayyip Erdoğan would run for the top job.

"I will not present my candidacy... my term expires on August 28," Gül told reporters ahead of a closed-door meeting with Erdoğan in Istanbul, adding that he had already informed the premier of his decision before the local elections in March.

Already in his third term as prime minister -- the maximum permitted under the ruling Justice and Development Party (AK Party)'s rules -- Erdoğan is widely expected to be unveiled on Tuesday as his party's candidate for August's presidential poll.

Gül, who assumed office in 2007, is tipped as a possible prime minister should Erdoğan run in the presidential vote on August 10, the first time voters will directly elect the country's head of state.

Asked whether he would consider the position of prime minister, Gül said: "Those are the things that we will talk about among ourselves later."

Gül, who co-founded the AK Party with Erdoğan, had previously said he did not have any political plan for the future and had ruled out swapping jobs with the premier.

The presidency has until now been a largely ceremonial role but Erdoğan has said he would exercise its full powers if he is elected -- which could be a source of conflict between the premier and the president.