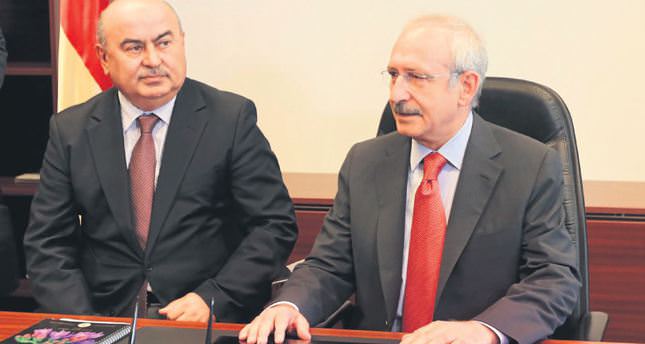 CHP members dissatisfied with the joint presidential candidate seek support for Emine Ülker Tarhan as an alternative, while Alevis voice their fury at the alliance formed with the nationalist MHP

Ahead of Turkey's first-ever presidential election where the president will be elected by popular vote, the opposition Republican People's Party (CHP) and Nationalist Movement Party's (MHP) announcement of former Secretary-General of Organization of Islamic Cooperation (OIC) Ekmelleddin İhsanoğlu as their joint candidate raised eyebrows across the country. CHP leader Kemal Kılıçdaroğlu, who stated that he would not backtrack on his decision despite criticism from CHP members, arrived in Germany on Thursday where he met with Turkish representatives and nongovernmental organizations to promote İhsanoğlu's candidacy. İhsanoğlu, who was officially announced as the CHP and MHP's joint candidate yesterday at the Turkish Grand National Assembly (TBMM), has received a wide range of criticism from within the CHP and various Alevi organizations, which claim he does not represent them, saying that they will not vote for him.

Public opinion polls also indicate İhsanoğlu may not get the CHP and MHP votes that they are expected to gain in the upcoming presidential election which will take place in less than 40 days.

During his visit to Cologne, Kılıçdaroğlu received backlash for İhsanoğlu's nomination from Europe's Alevi associations and federations. The chairman of the Alevi Union of Europe (AABK), Turgut Öker said in a meeting that Alevis will not support the joint candidate.&# 8232; Öker said, "In the final part of our meeting, I clearly told the CHP that we expected them to take bolder steps, to let go of its reserved nature and to adopt a more leftist, democratic and revolutionary attitude."

Referring to the 1978 Maraş and 1980 Çorum massacres that targeted Alevis, Öker said, "By showing a joint presidential nominee, you are building an alliance with the blood shedding MHP who is responsible for the deaths in Çorum and Maraş. Why not [correct] your direction and face the left, as would the genuine CHP." Öker added that İhsanoğlu is not a figure that can ensure Turkey's democratization or liberalization and his candidacy is not a positive step for Turkey's future.

While the CHP appears to have lost the minority Alevi's support ahead of the Aug. 10 presidential election, the internal conflict within the party reached a new level of intensity.

The rift started after the CHP failures in the March 30 local elections, which resulted in a search for new candidates with connections to the party.
Over the weekend, CHP's Eskişehir Deputy Süheyl Batum stated that CHP Ankara Deputy and former Deputy Chairman Emine Ülker Tarhan should be the CHP's presidential candidate on a TV program aired on Ulusal Kanal.

Allegations that former CHP Şişli District Mayor and previous Istanbul mayoral candidate Mustafa Sarıgül will establish his own party added fuel to the conflict within the CHP.

The Turkish daily Milliyet asserted that Sarıgül did not find what he expected from the CHP and will set up his own party in the autumn of 2014.
Sarıgül held meetings with the region's representatives of the Movement for Change in Turkey (TDH), which is a movement that was established under the leadership of Sarıgül in 2009.

It is alleged that TDH Central Anatolia representative Erol Erdem said, "The TDH pressed Sarıgül to set up his own party and it seems that in September or October, we [TDH] will establish our own party. We bought our party headquarter in 2010 and set up in cities and districts. When we were ready to set up our own party, Kılıçdaroğlu became the leader of the CHP and we gave [him] a chance, but he did not even appreciate it. When Sarıgül's Istanbul mayoral candidacy was announced, the TDH supported him whole-heartedly, but certain CHP members worked against Sarıgül's candidacy."

İhsanoğlu's candidacy drew criticism from the CHP's base and certain CHP deputies ever since the announcement of his joint candidacy. Harshly criticizing the CHP for retreating from its secular stance, CHP members and voters accused İhsanoğlu of being a religious figure who adopted Sunni political Islam as a lifestyle and stated that he is not a suitable candidate for the CHP.
RELATED TOPICS