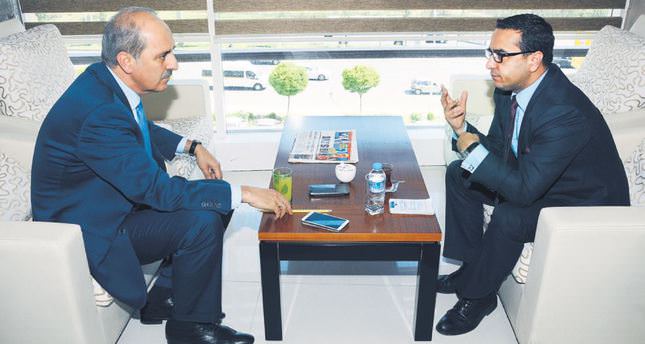 While evaluating AK Party's past Kurtulmuş said the success of the AK Party is due to the achievement of economic and political reforms simultaneously. He added after the elections, AK Party's main mission will be to complete reforms

The AK Party's presidential candidate will be announced tomorrow (July 1). What are your views on this subject?

Suggestions for who should be president were given by the Turkish nation at the elections held on March 30. This is one of the outcomes of the aforementioned election. This election is evidence that the public wants our prime minister to become the first elected president of the Republic. On Tuesday, it is most likely that the prime minister will be announced as our presidential candidate. This is the will of the people.

In Turkey, until now some power or interest groups have always influenced the presidential elections. For the first time, the president will be elected directly by the public. Considering Turkish politics, this is a revolutionary step. We have been saying this since the plebiscite. Being elected by the people, the post of president will become open to the people's supervision.

What are your opinions regarding the opposition's joint candidate?

The issue of the joint candidate can be evaluated from two aspects. First, the opposition parties' focus on a joint candidate is due to the idea that they would be unsuccessful if they presented separate candidates.

Second, the CHP was forced to keep pace with the changing mentality employed by the AK Party. After the military coup of May 27, 1960, presidential elections were held in 1961. While the coup leaders wanted to elect General Cemal Gürsel as president, Professor Ali Fuat Başgil stepped up as the people's candidate. However, because Professor Başgil had a conservative personality that was consistent with the people's values and not with the CHP's values, he was threatened with death and was not permitted to become a candidate. We have come a long way from those days, and there is a CHP that announces Ekmeleddin İhsanoğlu as their candidate.

This is them saying, "Look, our candidate also is consistent with people's values." This is a sorrowful situation for the CHP. The CHP is, in a way, confessing that it stood on the wrong side throughout its history. However, our people would have desired the CHP showing that it changed and won't struggle with the public by announcing a candidate of their own. Ekmeleddin İhsanoğlu's candidacy doesn't imply that there is a change in their intentions and course or a change in their mentality, which they maintain despite the public; it only expresses a tactical craftiness to get a higher percentage of the vote in the presidential elections. Accusations and objections coming from inside the party are the evidence.

There are many comments regarding the AK Party's future after the election. What are your opinions on this subject?

Do you think there is a diminution in the AK Party's will to reform?

Due to controversies in politics, it may seem like reforms have been neglected for 1.5 years. However, the message that the people gave to us after the local elections told us to continue and strengthen our reform efforts. Economic and social reforms will be continued with determination after the presidential elections.

Many important developments have been made in the last 12 years in Turkey. If I was to summarize these developments, I would say that there is a transformation in the mentality of the state, from a tyrannical one to a generous one. Changing the state mentality is the hardest part. There have been many prominent changes in the state mentality. However, there are still steps to be taken in this aspect. The AK Party's success is due to its realization of political and judicial reforms simultaneously. The 12 years of time that have passed is a period of transition and the time from now to 2023 will be another transformation period. This will be the period of changes becoming permanent and systematic, away from the influence of people and political parties. In the forthcoming period, we will achieve changes in the economy by crowning our macro level stability with micro level successes.

What do you mean by "macro level stability with micro level successes"?

What has been done so far in the economy could be defined as extinguishing a fire. We had to accomplish structural improvements in a spectrum of fields: the banking sector, decreasing government interference to grant freedom to the market and steps to change the role of the state as a regulator. Because we did these in the last 12 years, we have become a country with a steady macroeconomic balance. However, we need a change of phase. We are a country with an imbalance in exports and imports and an increasing population.

Also, we are in one of the strategic regions in the world. We need to focus on three things to provide sustainable development. First, we need to guide upper economic groups, meaning highly competitive companies, to international market competition. We need to encourage the R&D departments of these companies, and we need incentives to improve their brands and patents. Second, 65 percent of Turkey's economy consists of small and medium sized enterprises, and this is a neglected field. Thus, the productive activities of small and medium sized enterprises must be increased to support them with new finance methods to improve their competitive power. Third, the purchasing power of low-income families must be improved. Undeniably these things force us to adapt a new perspective. We need to move on by providing change and improvement in these three fields.

As an exemplary initiative, one of the projects we have realized is our aim to reorient from macro to micro is the Urban Economics Forum. We have completed this forum in 80 cities, except Istanbul, and we have determined these cities' aspects regarding competitiveness. We have selected five visionary projects for each city. We currently have an assessment, a road map. A civic platform has been established in this manner. We will continue our reform efforts with these types of applications, projects.

Every economy has periodic conditions. Also, there are conditions that are the result of the world economy's conjuncture. In the world economy, there has been an undeniably neo-Liberal wave from the 1980s until this day. This understanding foresaw no interference from politics, only regulating the economy with central banks and high-level committees.

However, the 2008 crisis revealed that these high-level committees were not functioning. Starting with 2008 crisis, all over the world, a transition from financial markets based understanding to growth, investment, production, employment and export happened. Turkey is in this process.

U.S. President Obama, in his NY Times interview in 2013, expressed his expectations of the new FED chairman by saying, "He [the chair] should have a perspective to assure fast growth in the economy, increase middle class income, create new employment opportunities and prevent new bubbles."

When the U.S. president says this, he is seen as not questioning the FED's autonomy. However, when we express similar expectations, we see that our expressions are relayed to the public in a distorted way.