There are still Gülenist infiltrators in the judiciary, says Erdoğan 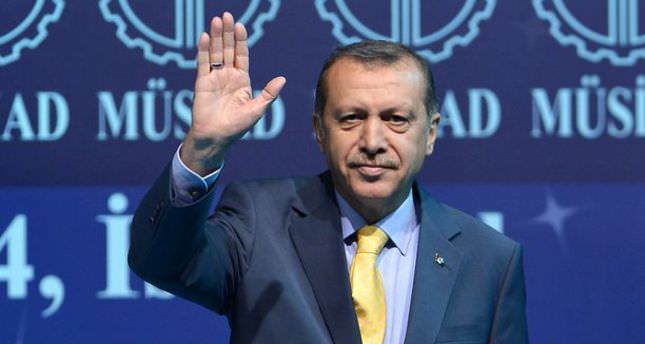 Touching on illegal wiretapping of key governmental bodies by Gülen-affiliated perpetrators and Dec. 17 operations to overthrow Turkish government, Erdoğan stated that those who are annoyed of the developing Turkey allied against us [the government] disregarding their ideologies, beliefs and values. He also defined Gülenist infiltration as a betrayal and ingratitude.

"Those traitors continue to betray. I want you to know that they exert every effort, but they will not succeed. They illegally wiretap the prime minister's office. All documents, perpetrators and evidences are obvious, but Gülenists who infiltrated into the judiciary are in struggle of covering this issue. There are still Gülen-affiliated ones in the judiciary. We know that they are not few in number, they cast a slur on the all judiciary bodies."

"They [Gülen Movement] should know that no one, no group, no foundation will betray as they did and turned into a pawn on certain platforms and organizations' game. Those traitors should be afraid of us [the government]."

Regarding the democratization process across the country, Erdoğan stated that there is no other country in the world that its democratic standards have been developed as much as Turkey in the last 12 years. The prime minister said that the government increases the freedom of the Turkish nation.

Referring to the regional issues and chaos in Iraq and Syria, Erdoğan stated that some people tried to reflect Turkey as a country that supports terrorist organizations only to put abducted Turkish citizens in Mosul into a danger. Erdoğan added that those people will not achieve their aims as they face a government with a strong will.

The self-proclaimed Islamic State of Iraq and al-Sham (ISIS) abducted dozens of Turkish citizens, including Turkish consulate members and drivers in Mosul during the ISIS militants advance in Iraq.

Speaking on the presidential election and stating that the president will be elected by popular vote for the first time , Erdoğan said that August 10 will be a turning point in the country's history in this regard.

While he is most likely to be announced as AK Party's candidate in July, Erdoğan said that an elected president and elected government will uphold the country's democracy.

Highlighting that Turkey made a considerable progress in economy; Erdoğan said that the country's average economic growth is around 5 percent for each year. Erdoğan further criticized Turkish Central Bank's interest policies and stated that in a country where interest rates are high, entrepreneurs and investors will not make investments easily.