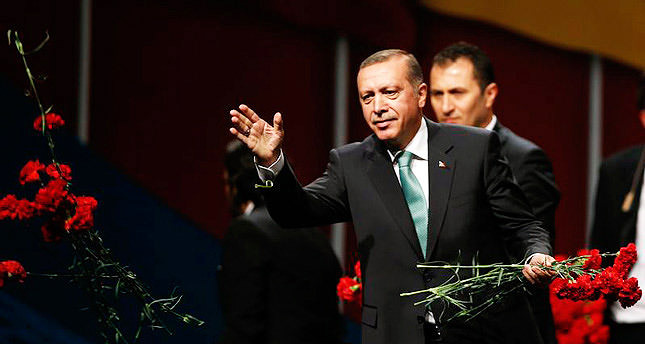 by Mehmet Solmaz Jul 01, 2014 12:00 am
The ruling Justice and Development Party (AK Party) announced Prime Minister Recep Tayyip Erdoğan's candidacy on Tuesday for the first direct presidential election that will be held on Aug. 10.

AK Party announced the party decision at Ankara Chamber of Commerce (ATO) Congress and Exhibition Hall, where a crowd of 4,000 specially invited guests were present to hear the announcement. Furthermore, around 250 journalists were also at the ATO hall.

After greeting the cheerful crowd with his wife Emine Erdoğan, who could not hold back her tears, the prime minister said, "I thank all my parliamentarian friends for nominating me as presidential candidate."

Commenting on president being not elected by the parliament but with a natiıonwide election, PM Erdoğan said, "President being directly chosen by the public is marking the end of tutelages-era in this country. We're not choosing a president against people, but a president that is elected by people. A president among the people."

PM Erdoğan later explained how he entered into politics and shared several experiences that he went through his political career and added that his presidential bid will not be "a farewell, in fact a new beginning, an opening. I also ask my wife and children to forgive me as I could not spend enough time with them due to my struggle for my country and nation."

After pointing out some of his governments' achievements through AK Party's 12 years of ruling, Erdoğan said, "We entered into politics for all those forgotten ones. We fought to dignify a civilization that was crawling face down. Thankfully we achieved this."

PM Erdoğan said, unlike in the past, the elected president will take an active role in drawing country's roadmap and added that he will not let the reconciliation process that is aimed to end the decades long conflict with the PKK to end. He also added that he will continue to combat against the shadowy movement -- which infiltrated police and judiciary with an aim to topple Turkish government -- led by US based controversial imam Fethullah Gülen.

"I pledge to work towards full membership in the European Union" PM Erdoğan said, reminding that Turkey opened accession talks with the EU during his ruling.

Even though he is one of the most criticized leaders in Turkey's history, Erdoğan is considered as the most influential Turkish leader after the founder of Turkish Republic Mustafa Kemal Atatürk by the majority of public. Winning every election that he ran for in the 12 years of AK Party ruling term, Erdoğan's party displays a continuous increase in terms of his popularity amid Turkish citizens and AK Party grassroots trust in him.

Contrary to the decline, 2014 local elections witnessed a sharp rise in AK Party votes and the party garnered 45.6 percent of the votes. The increasing success rate of AK Party with Erdoğan and the acceptance of certain AK Party voters that Erdoğan equals AK Party, arouses questions about whether the party without Erdoğan will continue to keep this rate of achievement in the upcoming general elections to be held in 2015.

With family origins in Turkey's Rize, Erdoğan is father of four and was born in Istanbul's Kasımpaşa on February 26, 1954 and graduated from the Istanbul Religious Vocational High School (İmam Hatip Lisesi) in 1973. Erdogan graduated from Marmara University's Faculty of Economics and Commercial Sciences in 1981.

He engaged in football as an amateur over the years 1969-1982. It was also in those years that Erdoğan began to take his first steps in active politics. An active member of various branches of the Turkish National Students' Union in his high school and university years, in 1976, Recep Tayyip Erdogan was elected Chairman of the Beyoğlu Youth Branch of the National Salvation Party (MSP) later to be elected Chairman of the Istanbul Youth Branches of the party in that same year.

When the Welfare Party (RP) was established after 1980's military coup, Erdoğan returned to politics and in 1984 he became Beyoğlu District Chairman of that party. Erdogan was later elected as Istanbul Mayor in the local elections of March 27, 1994.

Erdoğan was sentenced to a prison term because of a poem he recited on December 12, 1997 in a public address in the province of Siirt in southeastern Turkey. The poem was quoted from a book published by a state enterprise and one that had been recommended to teachers by the Ministry of Education. It included verses which translate to "The mosques are our barracks, the domes our helmets, the minarets our bayonets and the faithful our soldiers." Because of the conviction, Erdoğan was forced to resign from his post as mayor, and he completed his four months sentence on July 24, 1999, with a temporary ban from politics.

He later established the Justice and Development Party (AK Party) with a group of friends on August 14, 2001. He was subsequently elected Founding Chairman of AK Party by the Founding Board.

Appointed Prime Minister on March 15, 2003, Erdoğan implemented numerous reforms of vital importance within a short period of time. A great deal was achieved in democratization, attaining transparency and preventing corruption. Parallel to this, inflation, which had adversely affected the country's economy and the people's psychological state of mind for decades, it was finally taken under control and the Turkish Lira earned a prestige through the elimination of six zeros. Interest rates for public borrowings were pulled down, per capita income grew significantly. A host of new dams, housing projects, schools, hospitals and power plants were inaugurated at a pace never before witnessed in the history of the country. All of these positive developments were named "the Silent Revolution" by some foreign observers and Western leaders.