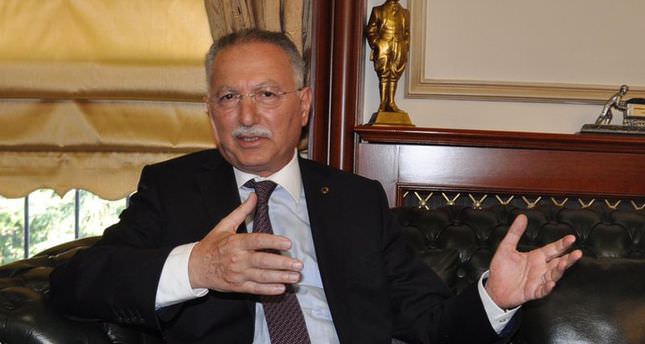 by Daily Sabah Jul 02, 2014 12:00 am
The Democratic Party (DP) has expressed that they have withdrawn their support from Ekmeleddin İhsanoğlu, the joint presidential candidate of Turkey's main opposition, the Republican People's Party (CHP) and the Nationalist Movement Party (MHP).

According to a written statement released by the DP, the party has previously announced their support for the joint candidate following visits to Kemal Kılıçdaroğlu, leader of CHP and Devlet Bahçeli, leader of MHP by DP's president Çetin Özaçıkgöz.

"CHP has called our party to attend the joint press meeting which will be made on Wednesday in Swiss Hotel with the participation of CHP, MHP, DP, DSP and BTP and our president Çetin Özaçıkgöz has personally been invited to the function" the statement said, which continued by expressing that Özaçıkgöz received a phone call on Tuesday and was first told by CHP's vice president Aytun Çıray that the event was cancelled but later on they stated that they were uncomfortable with DP's presence. "We do not find it ethical for a single party to deny us access to the joint press statement as the opinion of six parties regarding this matter should have been asked" DP stated and harshly criticized the CHP for their "inappropriate behavior".

The party then expressed that they have withdrawn their support from İhsanoğlu and thanked the leaders of CHP and MHP.