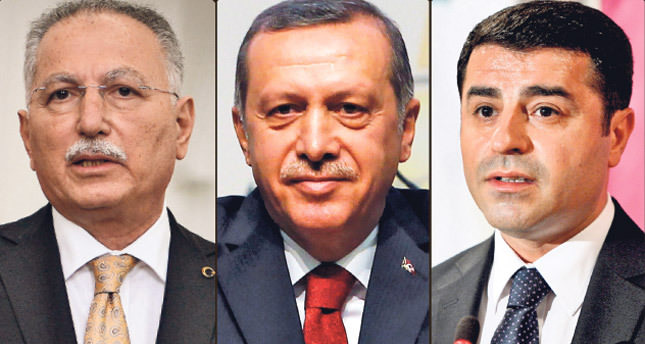 Today is the last day to apply to become a presidential candidate, but the race is likely to be between the three who have come forward, the AK Party's Recep Tayyip Erdoğan, CHP and MHP's Ekmeleddin İhsanoğlu and HDP's Selahattin Demirtaş, who will officially begin their campaigns
on July 11.

Turkish Prime Minister Recep Tayyip Erdoğan has been nominated as the AK Party's presidential candidate, while the Nationalist Movement Party (MHP) and Republican People's Party (CHP) announced former Secretary-General of Organization of Islamic Cooperation (OIC) Ekmeleddin İhsanoğlu as their joint candidate and the pro-Kurdish People's Democratic Party (HDP) nominated Selahattin Demirtaş, who is a well-known political figure among the Kurdish population in Turkey.

As Turkey's presidential elections in August will be the first-ever to elect a president through direct popular vote and there are only weeks left for the presidential race, questions regarding the election are still waiting to be answered.

After the TBMM Constitutional Committee in 2012 approved it in accord with the legal amendments in 2007, Turkey officially took a huge step to elect a president by popular vote.

The YSK has announced that there will be two rounds of voting if needed. The first round will be held on Aug. 10 and the second round on Aug. 24, since incumbent President Abdullah Gül will leave his post on Aug. 28. According to the new presidential elections procedure, if a candidate gathers an absolute majority, that candidate will be elected as president in the first round.

However, if one candidate does not receive a majority, the two candidates with the most votes in the first round will run in the second round. The president elected on Aug.10 will serve five years and can only serve a maximum of two terms.

In regards to past speculation over who will be a candidate for president. The YSK's criteria for candidates stipulate that they must be a Turkish citizen over 40 years of age who has a higher education degree and meets the requirements to be elected as a deputy. To be nominated as a candidate for the TBMM, an individual must have at least 20 official proposals from deputies.

Political parties that are not represented in Parliament can nominate a joint candidate on the condition that their total voting rate is above 10 percent.
The procedure suggests that judges, prosecutors, academics, certain government officials, mayors and military officers can be candidates if they retire from office when their candidacy is officially announced.

While the procedure urges non-parliamentary candidates to leave their posts, the riskiest candidacy is attributed to constitutional court members, judges, prosecutors and military officers since their candidacy negates them from returning to their posts.

However, parliamentary candidates can announce their candidacy without leaving their posts, thus, the prime minister does not have to leave his post now that he has announced he will run for president.

In the upcoming elections, candidates must follow the rules of the YSK, which are different from previous elections. Political parties can only organize election campaigns for their candidates without using government financial resources that were allocated to them according to their voting success. This application has aroused questions concerning how candidates will finance their election campaigns. Similar to election campaigns in the U.S., the upcoming presidential elections will see sponsorship by individuals who donate money for the candidates they support. According to the amendments, each candidate will have a bank account for election donations, and the amount of money that an individual can donate will be no higher than the highest degree of a government official's gross salary.

During the upcoming electoral campaign, foreign states, international organizations, legal entities and individuals who do not have a Turkish citizenship cannot donate money to candidates.
RELATED TOPICS