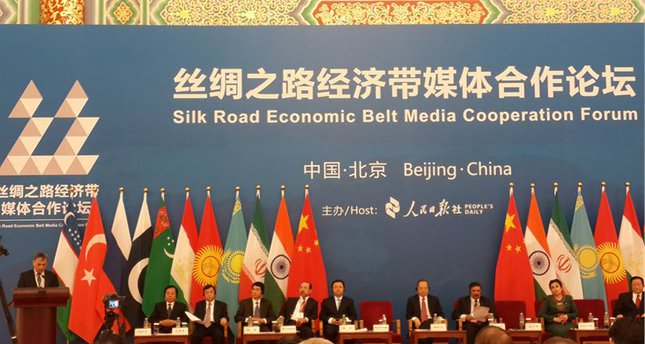 by Ali Ünal Jul 03, 2014 12:00 am
Officials, diplomats and media representatives from 11 countries including China, Turkey, Russia, India, Pakistan and Central Asian nations attended a forum in Chinese capital Beijing on Wednesday to discuss media cooperation among countries in the Silk Road Economic Belt.

The Silk Road Economic Belt Media Forum was organized by China's biggest newspaper, People's Daily, and participants from countries along the route of the ancient Silk Road delivered keynote speeches and took part in roundtable discussions as well as other forums during the event.

The concept of the economic belt was put forward by Chinese President Xi Jinping last year during his visit to Central Asia and aims to encourage more cooperation, development and increasing prosperity among the countries along the longstanding trade route.

"The ancient Silk Road was a major economic and cultural factor in the development of different civilizations. Therefore the Silk Road does not only belong to China but belongs to the world," China's Assistant Minister of Foreign Affairs Lui Jianchao said during his keynote speech at the conference while adding that this project is one of the priorities of Chinese foreign policy to outreach to the world. In line with Jianchao's speech, Assistant Minister of Commerce Tong Daochi said that the Silk Road Economic Belt aims to address regional imbalances and eliminate regional disparities through connecting landlocked Asian countries with regions that have a coastline.

At the end of the forum participants also issued a joint statement expressing their intention to promote the new Silk Road and increase media cooperation, which is an instrument for strengthening cultural and economic ties among all relevant countries.

In history the Silk Road linked China to Europe, while the maritime Silk Road was used by Chinese merchants to sell silk, ceramics and tea to overseas markets. China is using the catchphrase "One Belt and One Road" to describe its initiatives to build a Silk Road Economic Belt and a 21st century maritime Silk Road.

Chinese officials see the Silk Road Economic Belt as a revival project that could involve over 40 Asian and European countries and regions with a combined population of 3 billion. Moreover, officials hope to gain closer cultural and political ties with each of the countries along the new Silk Road and believe that it will contribute to long-term stability in the region.