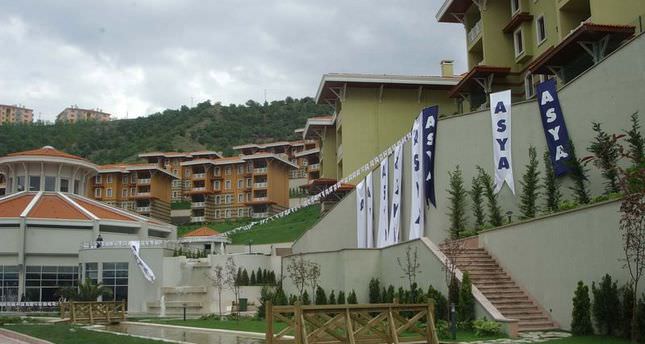 by Daily Sabah Jul 03, 2014 12:00 am
Bank Asya, a Turkish lender affiliated with the Gülen Movement, is planning to sell assets valued about TL 132 million. The sale is expected to include the "Asya Thermal Hotel" in Kızılcahamam, outside Ankara, where the AK Party held its consultation and evaluation meetings prior to the rift between the party and the Gülen Movement, which infiltrated the police and judiciary with the aim of toppling the legitimate government. The bank stated that it will also sell Tuna Gayrimenkul Yatırım Ortaklığı A.Ş, a real estate investment trust, in return for TL 62.8 million and Nil Yönetim Hizmetleri Emlak Turizm San. ve Tic. A.Ş., a separate real estate company valued at TL 69.25 million.

During his election campaign, Turkish Prime Minister Recep Tayyip Erdoğan called on AK Party members to not bring their wives and families to the AK Party consultation and evaluation meetings, and decided that the meeting should be held in a hotel in Afyon instead of Kızılcahamam, as the hotel previously used for the occasion was affiliated with the Gülen Movement. Taking into consideration security concerns that arose after the Gülen Movement used unlawfully obtained audio and video recordings in an effort to blackmail the government and threatened a number of officials, Melih Gökçek, the mayor of Ankara, remarked that a former minister and his family were given the same room in a hotel where they went for vacation, implying their stay was illegally recorded along with a number of the AK Party's female parliamentarians. The parliamentarians claimed they were not scared of threats posed by video or audio recordings, as they said they have not done anything wrong, but were wary of video recordings containing private images obtained at such locations.

The Gülen Movement is accused of illegally wiretapping thousands of people using Gülenist agents in the judiciary, police forces and other institutions in Turkey along with a number of other criminal charges. Judges, prosecutors and numerous public servants affiliated with the movement are currently being identified, investigated and tried on charges of paying allegiance to a third party instead of the state and the constitution.