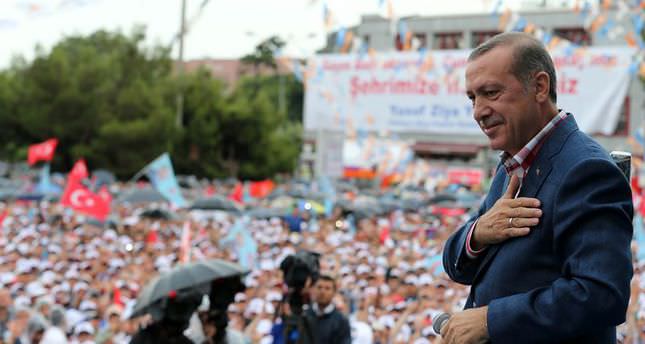 by Daily Sabah Jul 06, 2014 12:00 am
Prime Minister Recep Tayyip Erdoğan on Saturday, started his presidential campaign in Samsun-the city where the Turkish War of Independence was initiated by Atatürk- and pledged that he will not be a symbolic president but will look after all sorts of developments tending to the needs of the people.

"We are starting a new historical journey here in Samsun today" said Erdoğan, who expressed it was not a coincidence to start the presidential election campaign in Samsun, yet, it was chosen specifically because of its historical significance.

Criticizing Kemal Kılıçdaroğlu, the leader of the Republican People's Party (CHP) for calling all presidential candidates to be apolitical, Erdoğan stated such people are only worried about preserving the status quo rather than electing a president who will represent the people. He described the qualities of the president and stated a president is someone who follows the services and developments in the country while ensuring unity of the people and praised President Abdullah Gül's performance. Erdoğan noted the elections of Abdullah Gül and former president Turgut Özal (late) were opposed by an elitist segment of the society but this will no longer be the case, as the people will directly vote for their president, which will move Turkey forward. Furthermore, he criticized CHP for opposing the 2007 referendum which inquired if the president should be elected by the people or not.

Erdoğan also responded to the allegations that the AK Party would be divided following Erdoğan's election as the president. "I am not leaving you or stopping to serve you" said Erdoğan who exclaimed that the president of the people would not lay back but would continue to make reforms and improve the economy while improving relations between different people in the country.

Calling on the nation to vote on August 10, Erdoğan encouraged everyone on vacation to be sensitive citizens and make arrangements to vote in cities where they were to holiday.

Recep Tayyip Erdoğan, who is currently the prime minister of Turkey, is AK Party's candidate running against Ekmeleddin İhsanoğlu, the joint opposition candidate and Selahattin Demirtaş, the People's Democratic Party's (HDP) presidential candidate. Recent polls suggest Erdoğan will be able to win the elections by over 50 percent of the vote while İhsanoğlu is expected to receive around 35 percent, followed by Demirtaş with around 8 percent.