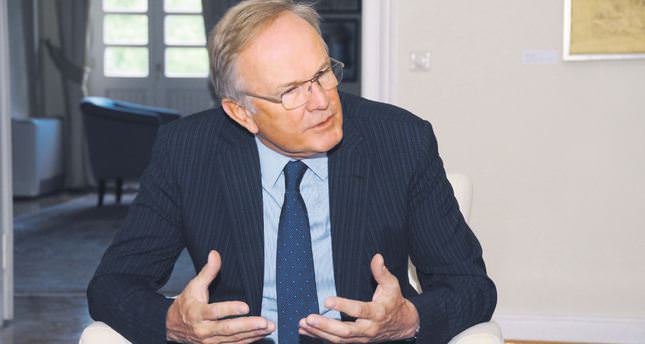 Speaking with Daily Sabah about Turkey's EU accession process, German Ambassador to Turkey, Eberhard Pohl stated that even though there is a sense of stagnation on advancing Turkey's position, Germany is still working to keep trust alive

Turkish-German relations have witnessed interesting incidents over the last few months. Some critical statements have been exchanged between officials from both countries, despite the fact that commercial, economic and cultural ties between Turkey and Germany are constantly developing and both countries are enjoying strong bonds of friendship for centuries. Germany is Turkey's biggest trade partner and more than 3 million Turks reside in Germany.

We have witnessed interesting incidents in recent months regarding Turkish-German affairs. Officials from the two countries criticized one another on various issues et cetera. In general, would you say Germany-Turkey relations are deteriorating?

My simple answer is no. I'm deeply convinced that Turkish-German relations are very solid and broad-based, I can give you many examples. There is a human dimension which is very important. More than 3 million people of Turkish origin are living in Germany. This is a basis and a great opportunity for developing relations in all fields. Look at the economy; Germany is the biggest trade partner of Turkey.

Look at cultural relations, which are very intensive. Look at political and security policies of relations; we just met for the latest Session of the Strategic Dialogue between both countries in İstanbul. At the same occassion we also launched the Turkish-German Youth Bridge, an organization which will promote youth exchange between our two countries.

Then of course, 2014 being the Turkish-German Year of Science offers us great opportunities for deepening academic and science exchange on all levels. Just recently in April, Federal President Gauck together with President Gül officially opened the Turkish-German University in Istanbul. And of course, let me also mention the Cultural Academy in Tarabya, which is of particular interest for Foreign Minister Steinmeier and will foster the cultural exchange.

In sum, I see a lot of progress and very positive developments. I would call public statements which are reported by the press both here and in Germany "atmospheric turbulences" while the substance of the relationship is extremely strong.

What does Germany think about the ongoing reconciliation process with Kurds, aiming toend the decades-long conflict? What are your thoughts on the matter?

It's very encouraging. For 1.5 years there is almost no violence left. But of course, this is not good enough. Germany is very much supportive of moving this process forward, to really pacify this conflict because we see that it's a very heavy burden on Turkish people, Turkish economy and politics in many ways. Another aspect is: in Germany there are almost 700,000 people of feel themselves as Kurds.

Germany has a clear interest in this conflict getting settled. Therefore, German government encourages Turkish government to continue this process and to build a strong consensus in the country. It is both: a great opportunity and a great challenge for Turkish democracy.

What is Germany's stance on Turkey's EU Accession bid?

We have seen a slump lately for sure. But if you recall the statement made by Chancellor Merkel here in Ankara a year ago or the statement just recently made by FM Steinmeier in Istanbul, we clearly say:

Germany is in favour of bringing new dynamics in the process. We have declared time and again that we are in favor of opening chapter 23 and 24. Foreign Minister Steinmeier described these chapters as being the ideal platform for discussing issues like the rule of law and fundamental rights. There is another very important element: the agreement on a visa dialogue between EU and Turkey is very important. I hope we can move forward on that track smoothly. Personally I am very glad that finally the readmission agreement was ratified by the Turkish Grand National Assembly (TBMM). This was a major step forward. But I think we need both: progress the visa dialogue and the promotion of the broader process in terms of adapting Turkish legislation to the EU standards.

We want dynamism; we want the accession-negotiations to move forward. However, there is no automaticity for Turkey's joining the EU. Bur this is exactly, what is also said by Turkish politicians like President Gül. Once the final stages have been reached, the people in Turkey and in Europe have to decide on how to move forward.

As you just said there are currently 3 million Turks residing in Germany. In terms of the integration of the Turkish community in Germany, do you consider Germany's integration policies successful?

Do you know that in Germany we have around 16 million people with family roots outside Germany? Out of them the biggest group is of course people of Turkish origin with 3 million. So for the German society, successful integration and the building of an open society is a key challenge.
We have seen a huge progress in the last ten to twelve years. There is much stronger awareness that this is a very important policy objective for Germany.

We are seeing today that Germany's population is growing in spite of the fact that Germans get less kids than ever. And the reason is very simple: many people come to Germany to find jobs, but also because they like to live in Germany with all its assets; good infrastructure, solid and affordable education system, culture, etc. In sum, I am optimistic in this.

There is a clear consensus in Germany that state authorities and government have to actively promote integration. That isbeing done by a host of measures. And the awareness in public domain, in the civil society, amongst the German citizens, has also been growing very much. And of course the statement PM Erdoğan made in Cologne, he was also helpful: integration is not a one-way street.

The most recent European elections revealed that far-right political parties continue to gain support across the continent. In Germany, the Alternative for Germany (AfD), a party that sympathizes with the neo-Nazi ideology, claimed a seat at the European Parliament for the first time. Are you concerned about this trend?

I think all governments and people who are convinced that Europe is the right way to go have to work hard to promote much more positive image of what we have achieved. Europe has achieved peace, prosperity and it has also achieved a sort of consensus building among bigger and smaller nations shaping common policies. This is a great achievement.

First, there is still a very strong, mainstream of conservatives & social democrats in the European parliaments. That is good news. On the other hand, you see increasing numbers of protest votes going to the left extremists and to the rightists. This trend is certainly worrying and calls for action. In the case of Germany, the NPD as the strongest rightist party has less than 1% of votes and one seat in the parliament - which is one seat too much! As for the AFD, it's fair to say that it's a Euro-sceptic party but not a rightist party in that sense.

Europeans have to act together in many ways: in terms of overcoming the financial crisis, in regaining competitiveness. But news coming from Brussels show a positive trend. We also have to shape the future of Europe together - a Europe that is modernizing and engaging more closely with its neighbourhood, with candidate countries. But I'm optimistic: Europe has seen problems in the past and has always succeeded to overcome them due to the common understanding and conviction that for European nations the EU has always been a great success story.

Over a year has passed since the National Socialist Underground (NSU ) trial began. Could you provide any insights about the trial's progress? Do the German authorities follow the developments?

The court is considering the case and things are developing according to German law. But we have also seen several Inquiry Commissions: in the Federal parliament but also in state parliaments. A set of initiatives and proposals have been developed. Now parliaments but also governments have to pursue these initiatives and look at the structures. We have to identify weaknesses in the system and improve it.

Last year the chairman of the Bundestag Inquiry Commission came to Ankara twice to share and to explain the findings. The report was published in both languages, German and Turkish - because we want Turkish people to be able to closely follow the process. It was clear that everything had to to be as transparent as possible.

In essence, the findings did not suggest that there was any cover up. There was blunder, mistakes were made, there were structural deficits in the German security system but no systematic cover up.

German President Joachim Gauck said that the German military should play a greater role in resolving international conflicts. This statement sounds like a major shift in German foreign policy. What more can you say about it?

I think essentially President Gauck has called on the German public and German politicians to be ready to take over more responsibilities in the international arena. It's a major shift in foreign policies.

Germany is doing already a lot in the NATO framework, in Afghanistan, at the Horn of Africa or in Kahramanmaraş where German Patriot missiles help to protect Turkey.

But also beyond that in the EU framework, there are number of civilian and military missions like police training in Afghanistan, in the Western Balkans, in Africa. German engagement abroad is already quite broad and strong - in civilian and military crisis management. Another good example is Foreign Minister Steinmeier's role in trying to pacify the situation in Ukraine lately. In sum, the ideas that President Gauck shared don´t mean a major shift in German Foreign Policy at all.
Last Update: Jul 07, 2014 4:50 pm
RELATED TOPICS