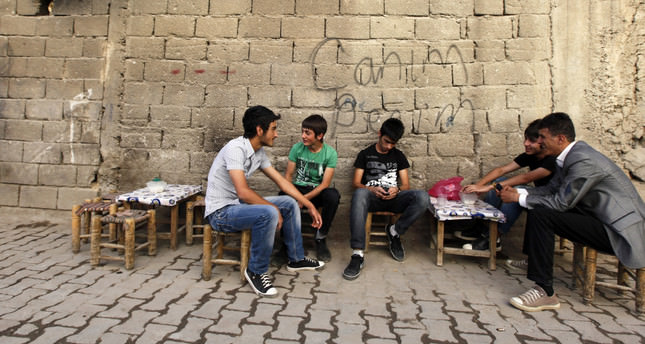 by Daily Sabah Jul 07, 2014 12:00 am
Several AK Party deputies went to Ireland to examine the Good Friday Agreement between the British government and the Irish Republican Army as part of efforts to disarm the PKK and provide a boost to the reconciliation process. Turkey has taken a huge step forward in solving the Kurdish issue with the reconciliation process that started between Ankara and the Kurds in 2013.

Last month AK Party deputies went to Ireland to evaluate the "Good Friday Agreement" between the British government and Irish Republican Army (IRA) to maintain the peace achieved between the two sides. Following the approval of six articles in the draft bill for the reconciliation process, the AK Party deputies' report on the Good Friday Agreement highlighted five important steps to maintain permanent peace and disarmament.

Describing disarmament as the most difficult stage, the report noted that IRA accepted to disarm seven years after the Good Friday Agreement. The five requirements for successful disarmament were good timing, effectively raising awareness among the public with campaigns, garnering the popular support of the nation to support the process, nongovernmental organizations' support for negotiations and mediators' contributions to ensure disarmament.

The report also stressed that certain IRA members who were detained went into politics and some of them became political party leaders. AK Party deputies stressed in the report that they contributed to the reconciliation process which bettered social integration.The report says that amendments in four important fields were made to ensure that the agreement was put into practice. These amendments include reforms in releasing detainees, transparency policies and improvements in police departments as well as the penal and justice system.

The report stated that despite years of effort, hate speech is still common in Northern Ireland as well as rage between Catholic and Protestants, supermarkets are separated from each other through steel walls. The report asserted that cultural bonds, sharing the same beliefs and religion for years and common gains have been ensured between Turkish and Kurdish people, offering more hope for reconciliation and peace. AK Party deputies spoke with figures participating in the Good Friday Agreement. The Center for Peace and Reconciliation head Will Devas stated that the center worked mostly with youth and women who held a harsh view against the agreement in Ireland to dissuade them from violence.

Former Irish government's spokesperson Richard Moore highlighted the importance of media outlets in the process and said media outlets perverted certain statements of both sides. As part of efforts to effectively carry out the reconciliation process, AK Party deputies visited Ireland upon the invitation of the Ireland Democratic Progress Institute. Irish officials stated during the talks that the positive outcomes can only be ensured by including not only the ruling parties but also parties opposed to the reconciliation process. Following the visit, AK Party Adıyaman Deputy Murtaza Yetiş stated that confrontation with those who were damaged by the conflict is a must for ensuring positive outcomes. The IRA was an armed organization based on Northern Ireland that fought for unification with Ireland.
RELATED TOPICS