What are Turkey's next steps on its way to Europe? 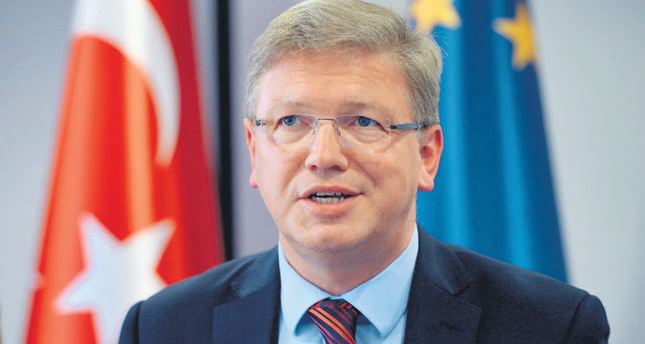 Commissioner for Enlargement and European Neighborhood Policy Stefan Füle, in a column written exclusively for Daily Sabah, calls on Turkey and the EU to work together to make 2014 the year of the EU, which he admits has a credibility problem in Turkey

Does Europe need Turkey? Does Turkey need the EU? Will Turkey become a member of the Union? I heard these questions many times during my visits in Turkey and during my meetings about Turkey's accession.

My response has always been that it is not about whom needs who more, but that it is about the reality of our already existing deep ties in many fields. It is about the huge joint potential offered by our relations, shared strategic interests and cooperation that can be best realized in the context of the accession process. Turkey is one of the countries under my responsibility where my team and I spent most of our energy, time and resources trying to move things forward. We were always in agreement with our Turkish partners that the EU accession process is the best framework for the modernization of Turkey - a goal all of us have in common.

And while we managed to create renewed momentum in the last year with the Positive Agenda, opening a new negotiating chapter and progressing on visa issues, this year has been marked by developments which have raised serious concerns and even doubts over Turkey's commitment to European values and standards.

Does it mean that we are giving up on Turkey? Definitely not. We want to see Turkey consolidate its remarkable achievements made since 1999, when it became a candidate country, and cement its position as a modern European state. We are committed to support Turkey in this and to share our experiences with it. But we also need to see that Turkey itself wants to continue to move in the right direction. A strong commitment by Turkey to further reforms is indispensable. This commitment looks jeopardized. While in several areas this is visible, albeit unfinished (labor and social issues, rights of minorities, migration and refugees, etc.), nowhere is it more urgent than on the fundamentals - in areas which stand in the very heart of the accession process: reform of the judiciary, the rule of law and respect for fundamental rights and freedoms. It is important to recreate and sustain the momentum of our engagement on these issues in the coming months to achieve real and tangible results.

The accession process is the engine of our relations. But the gearbox is the making of convincing progress toward reform and progress can only be made with the two, driving us forward in tandem. This means also that the EU side has to overcome its credibility problem in Turkey with regard to our sincerity in advancing the accession negotiations. I have said and I am convinced that more Chapters should be opened, notably Chapter 23, to facilitate more concrete and stringent negotiations. But, in fairness, this cannot be used as a reason to deviate from fundamental principles we already subscribed to together at the very beginning of the accession process.

Let us also not forget that any progress will be linked to progress on issues in Cyprus - and I commend Turkey's commitment to support the settlement process. However, a full implementation of the Additional Protocol would allow an immediate resumption of negotiations on 8 chapters.
I have encouraged my Turkish partners to pursue a close dialogue with the European Commission in the area of the rule of law and fundamental rights. It is crucial that Turkey engage with the competent European institutions - the European Commission and, others such as the Council of Europe - on any legislation affecting these areas, at an early stage, in order to ensure that it brings Turkey closer to EU standards, not further away.
This is not a bureaucratic or academic exercise - it is not about making someone in Brussels happy. It is about Turkish citizens and their freedoms in a modern state where democratic principles are deeply rooted, a culture of pluralism thrives and the rights of people are respected and upheld by an independent and impartial judiciary. You cannot build a modern European state without laying the foundations for safeguarding fundamental European values and principles. Turkey knows it very well and has already undertaken important steps in the last few years.

Reforms need to be inclusive, and a part of this is that Civil society needs to be consulted and have an environment conducive to it playing its essential role to the full. The Turkish public needs to have confidence that reforms will bring concrete, positive and progressive change to their everyday lives.

Measures must be taken to ensure that the judiciary is able to act independently and in so doing enjoy broad public confidence. It needs to build consensus on key issues including the reasons and the purposes of EU accession. And it needs to swiftly tackle the troubling polarization of Turkish society. All institutions have a role to play in doing this.

There is a chance, through determination and with our support, to achieve real results in these essential areas and set the tone for the October Progress report that will allow us to widen and deepen what we all recognize to be a relationship of strategic importance. We are ready to increase our support and our work for that. It will be the last Progress Report of this Commission but it will serve as a basis for the new Commission to determine how to continue the EU´s engagement with Turkey. I hope Turkey will provide us with the positive substance to achieve it, because the future of the accession process will be determined by Turkey's own decisions, efforts and credibility. We look to work together with Turkey to fulfill the commitment to make 2014 the year of the EU.