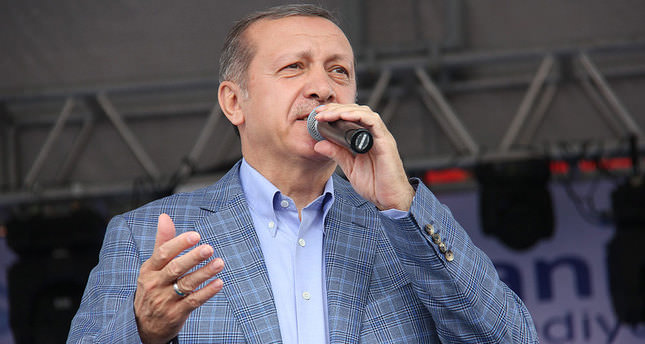 Prime Minister Erdoğan went against the opposition candidate's proposed policy, saying that Turkey will "continue to the take the side of victims in Palestine, Libya, Iraq and Syria just like they took our side during the Turkish people's struggle for independence."

The prime minister pointed out that Turkey cannot remain insensitive to developments in the aforementioned countries and accused those who prefer to remain silent of being unaware of the situation and betraying the history of the country.

Erdoğan spoke during an iftar event on Sunday in Turkey's eastern city of Erzurum and made striking comments regarding the upcoming presidential election, Turkey's foreign policy and the reconciliation process between Ankara and the Kurds.

The prime minister pointed out the government's determination to "ensure one nation, one flag and one state will continue, a state that will never tolerate discrimination, violence and denials regarding the Kurdish question."

Regarding the presidential election, Erdoğan pledged that Turkey's economic and foreign policies will receive extra attention if he is elected president, claiming Turkey's development will gain extra momentum.

The prime minister said that during the AK Party's term in office, the party has, to a large extent, removed issues such as the military coups that posed a threat to democracy.

He asserted that the ceremonial and symbolic presidency and Turkish constitution were elements that belonged to the old Turkey. Also, Erdoğan said that the AK Party has "fought for a new, liberal, participatory and democratic constitution." "The AK Party believes in the nation's foresight and that is why the party always leaves critical issues up to the nation's [conscience]." He touched on the economic development of the country and stated that Turkey's growth rate is around 4.3 percent while this rate is around 0.8 percent in Europe.
Last Update: Jul 08, 2014 11:48 am
RELATED TOPICS