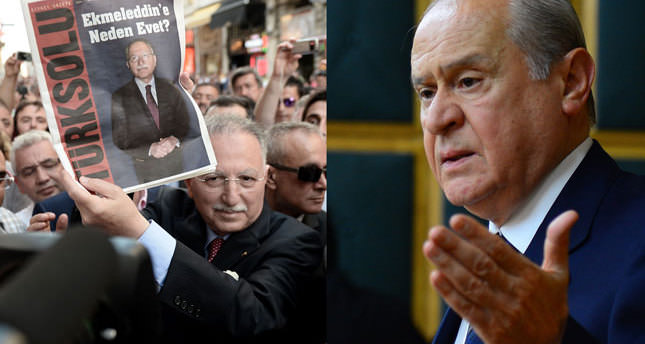 Tension rises between MHP's Bahçeli and HDP's Demirtaş. Joint candidate İhsanoğlu, nominated by CHP and MHP criticised Bahçeli, therefore raising the question of whether consensus may be harmed

The joint presidential candidate of Nationalist Movement Party (MHP) and the Republican People's Party (CHP), Ekmelleddin İhsanoğlu, continues to portrait a different stance than the political parties which nominated him.

People's Democratic Party's (HDP) presidential candidate Selahattin Demirtaş called on İhsanoğlu to respond to anti-Kurdish rants by the MHP leader for claiming that Demirtaş's candidacy is not legitimate. Bahçeli alleged that Demirtaş is an illegitimate candidate and called on the Supreme Election Board (YSK) of Turkey to cancel his candidacy. "The presidential candidacy of this PKK member, who has been nursing a grudge against our Republic, is against the law. A thorough investigation should be conducted against him," MHP leader said during a party meeting in Ankara on Saturday

Demirtaş's response came the next day, when he said he is expecting the opposition's joint presidential candidate Ekmeleddin İhsanoğlu to comment on the MHP leader's comments. "I am curious if İhsanoğlu agrees with Bahçeli or differs in views," he said. Demirtaş also claimed that Bahçeli and İhsanoğlu underestimate the Kurdish people and view them lower than Turks.

When asked about his opinion on Bahçeli's remarks about pro-Kurdish candidate, İhsanoğlu said, "The requirements for presidential candidacy are drawn by laws. Deputies of our Parliament -- the place where national-will is manifested -- have shown the kindness to nominate Mr. Demirtaş. All candidates who fulfill the criteria of the Supreme Election Board (YSK) is our respective rival in this democratic competition," İhsanoğlu said.

His words came a day before posing to cameras when holding a controversial ultra-nationalist magazine Türk Solu (Turkish Left) -- with his photo on the cover -- during his election campaign at the iconic Istiklal Street. İhsanoğlu posing with Turkish Left sparked ire among MHP supporters, with many claiming that the 71-year-old candidate -- who stepped into Turkish soil for the first time at the age of 27 -- has no sufficient knowledge about Turkey or the anti-MHP magazine that he held in his hand.

The MHP is known for its strong objection to the reconciliation process, which is aimed at ending a decades-long conflict in southeast Turkey by disarming the PKK while the BDP is accused of causing difficulties throughout the crucial process.

İhsanoğlu also drew criticism from conservative circles for his continues pro-secularism remarks and for not condemning Israeli airstrikes on Palestinians. During a televised interview last week, İhsanoğlu stated that Turkey should be unbiased in the Palestine-Israel conflict, drawing criticism from many.

According to major public research companies' surveys, Demirtaş will receive about 8 to 10 percent of the public's support for his presidential candidacy and İhsanoğlu is expected to receive about 35 to 40 percent. The most recent polls show that Prime Minister Recep Tayyip Erdoğan will receive above 50 percent in the first round of the election and avoid second round of voting.