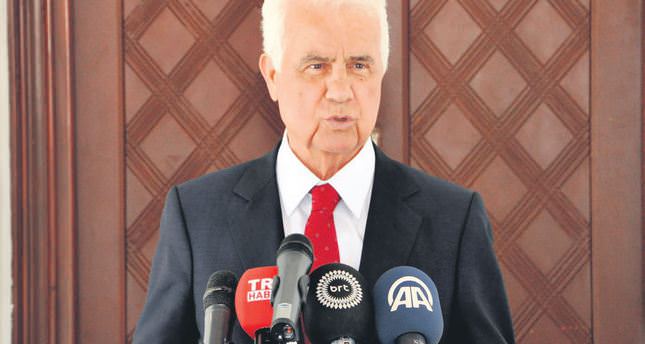 Turkish Cypriots submitted a five-step roadmap for future negotiations on the long-standing conflict regarding the divided island, Derviş Eroğlu, the president of the Turkish Republic of Northern Cyprus said

The two-and-a-half hour meeting held with Greek Cypriot leader Nikos Anastasiadis and TRNC President Derviş Eroğlu was conducted in a "constructive and sincere manner," according to U.N. chief 's special representative in Cyprus, Lisa Buttenheim. "We answered the Greek Cypriot's offers on confidence building measures and submitted a five-step roadmap to Anastasiadis,"Eroğlu said.

A "transition period" as well as the opening of three borders in Nicosia are on the agenda for discussion.

The next meeting will be held on July 24. The island of Cyprus has remained divided into Greek and Turkish parts since a Greek Cypriot coup was followed by a Turkish peace mission to aid Turkish Cypriots in the north of the island in 1974.

The 2004 Annan plan, which was rejected by Greek Cypriots but overwhelmingly endorsed by the Turkish side, was the last comprehensive peace deal since 1974.

The Greek Cypriot administration joined the EU in 2004 and has become the main obstacle to Turkey's efforts to join the union.

In the past two years, both sides on the island have been working on a comprehensive deal to facilitate the unity of Cyprus. In an article he wrote for Daily Sabah, Commissioner for Enlargement and European Neighborhood Policy Stefan Fule said, "Let us also not forget that any progress will be linked to progress on issues in Cyprus - and I commend Turkey's commitment to support the settlement process. However, a full implementation of the Additional Protocol would allow an immediate resumption of negotiations on 8 chapters."

The additional protocol would allow unrestricted access to Greek Cypriot shipping at Turkish ports. Turkey does not want to endorsee such a deal because it does not official recognize the entity and desires for a comprehensive peace deal on the island before proceeding.
RELATED TOPICS