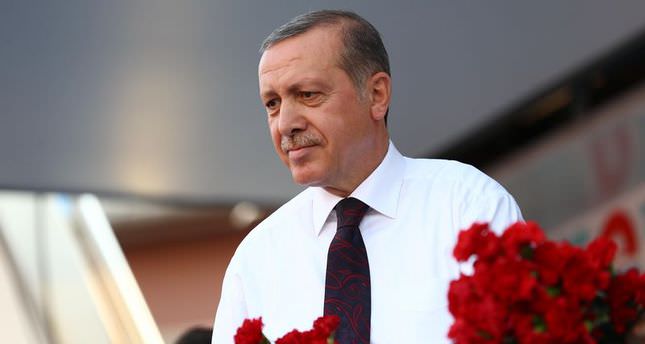 by AA Jul 09, 2014 12:00 am
Turkey's Prime Minister and presidential candidate Recep Tayyip Erdoğan has scorned opposition parties' portrayal of their joint candidate as an 'impartial statesman,' saying he will be biased towards the nation when elected.

"If I'm elected, I will not be an impartial president. There are two sides: the state and the nation. I will be on the side of the nation," Erdoğan said Tuesday during his ruling Justice and Development (AK) Party's parliamentary group meeting in Ankara.

"We are not electing a flower pot for the display window of the state but a president who will administer the state, be a commander-in-chief and enable a smooth functioning of the state institutions," he said.

In response to the main opposition Republican People's Party leader Kemal Kilicdaroğlu's statements that their candidate is "above politics," Erdoğan said the president should be a full-fledged politician, adding that searching for candidates out of politics is a reflection of coup mentality.

The country's two main opposition parties the Republican People's Party and the Nationalist Movement Party nominated 77-year-old Ekmeleddin Ihsanoglu, former head of the Organization of the Islamic Cooperation, as their joint presidential candidate.

A close colleague of modern Turkey's founder Mustafa Kemal Atatürk and a revered hero of the War of Independence, Inönü led the Republican People's Party from Atatürk's death in 1938 to 1972.

"Or Cemal Gürsel, who got elected under the shadow of the 1960 coup, or army generals Cevdet Sunay and Fahri Korutürk, or the convicted leader of the 1980 military coup Kenan Evren, or Süleyman Demirel, or Ahmet Necdet Sezer? Which one of them was impartial?"

"We know that all of these presidents were partial one way or another," Erdoğan said.

Turks will go to polls on August 10 to choose their first popularly-elected president. If no candidate can secure more than 50 percent of the votes in the first round, a runoff will be held on August 24 between the top two candidates.