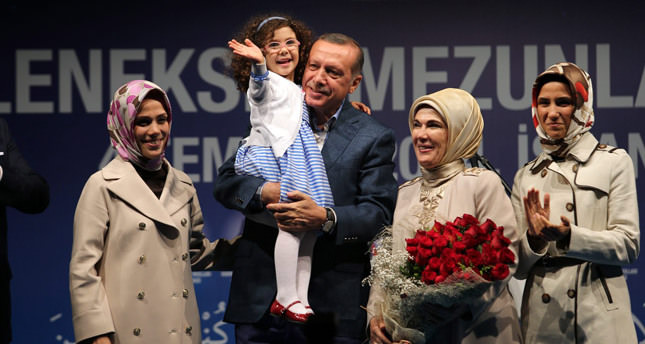 Presidential candidate Erdoğan will present his 'vision document' on Friday, which will include accomplishments and objectives concerning the reconciliation process, the Alevi issue, a new constitution and EU process

Prime Minister Recep Tayyip Erdoğan is expected to release his vision document this Friday at an event to be held at Haliç Congress Center in Istanbul.

Turkey's ruling Justice and Development Party (AK Party) unsurprisingly announced Erdoğan's candidacy on July 1 to become the country's first popularly elected president. Moreover, the latest poll results indicate that Erdoğan will claim a clear victory over his rivals, Ekmelettin İhsanoğlu and Selahattin Demirtaş, in the first round of presidential elections on Aug. 10 by receiving more than half of the votes.

A large group of politicians including Deputy Prime Minister Beşir Atalay, Culture and Tourism Minister Ömer Çelik, AK Party Deputy Chairman Mustafa Şentop and AK Party Spokesman Hüseyin Celik have been working on the document and details will be announced this Friday by Erdoğan.
According to sources in the AK Party, two key slogans, "transformation" and "New Turkey," will be utilized through the document.

In the first part of his speech Erdoğan is expected to highlight Turkey's achievements over the last 12 years during his time as prime minister and stress the importance of protecting these gains. He is also expected to put forth his goals and commitments regarding his presidency in the second part of the speech.

Regarding the speech and the vision document, last week Erdoğan said that he will address the details of reforms they have accomplished. "All of the steps we have taken in education, health, justice, security, transportation, energy and the economy are obvious. I will not go into the details now, we will be speaking about all of these details when we announce our vision document,"

Erdoğan said last week. AK Party officials say the 12 years was a period of transition and from now until 2023 will be another transformation period. According to senior officials, after Erdoğan's expected victory, in the forthcoming period, changes and reforms will become permanent and systematic, away from the influence of people and political parties.

Sources expect that the vision document will address many issues such as the new constitution, the Kurdish reconciliation process, the Alevi issue, the EU accession process, Turkey's foreign policy, new reforms to expand fundamental rights and freedoms and universal principles of justice and rule of law. Rather than tangible promises often made during local and general election campaigns, the vision document will emphasize Turkey's future, improving democratic standards and Turkey's international prestige.

Inclusiveness is also expected to be one of the main issues emphasized during Erdoğan's speech. Over the years Kurds and Alevis were systematically excluded from the political process and their demands were ignored by the government.

This is one of the main reasons the AK Party has committed itself to regaining confidence in different segments of society and uniting the country. The Parliament's recently approved six-article package aims to boost the ongoing Kurdish reconciliation process and sources stated that officials are already working on the new reform package that will attempt to tackle problems facing the Alevi community. The government is set to launch the new package just after the presidential election on Aug. 10. Earlier last week Erdoğan said that he will unite the country under his presidency and seek a new constitution that may expand the powers of the largely ceremonial post. "If I am elected on Aug. 10, I won't be the president of one section but the president of everyone," Erdoğan said.

In line with these polices Erdoğan is expected to continue the reform process during his presidency.
Last Update: Jul 09, 2014 12:42 pm
RELATED TOPICS