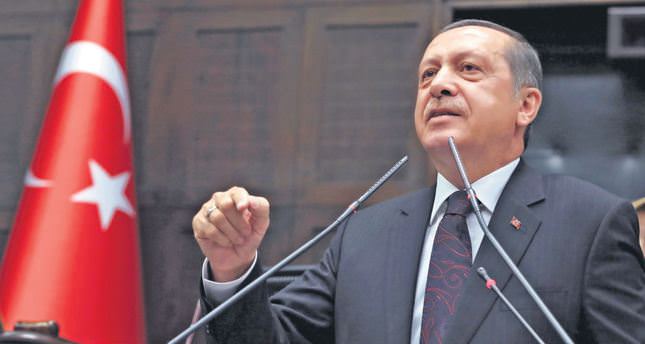 by Daily Sabah Jul 09, 2014 12:00 am
Turkish Prime Minister and Justice and Development Party (AK Party) presidential candidate Recep Tayyip Erdoğan said yesterday that if he is elected president, he will not be impartial, but will side with the nation.

Speaking at his party's group meeting, Erdoğan made striking remarks on the upcoming presidential election where the president will be elected by popular vote for the first time in Turkey's history. Erdoğan said, "If I am elected president, I will not be impartial. There are two sides. One of them is the nation, the other is the state. The elected president will take side with the nation. That is what Turkey and its democracy needs."

Criticizing the Republican People's Party (CHP) and Nationalist Movement Party's (MHP) policies toward the presidential election and their nomination of former Secretary-General of the Organization of Islamic Cooperation Eklemeddin İhsanoğlu as their presidential candidate, Erdoğan said, "The CHP does not rely on the nation, just like it was during the one-party rule. And now, they [CHP] are in a struggle to elect not a president, being apolitical and out of politics, but a vase in Turkey's showcase."

Erdoğan stated that the AK Party will continue to serve the nation and urged MHP voters that current MHP leader Devlet Bahçeli's term in office has been the worst period of the nationalist party.

Continuing to slam Bahçeli, Erdoğan asserted that the MHP and CHP took the risk of losing by creating an alliance with the Gülen Movement, which infiltrated the police and judiciary with an aim to discredit Turkey's legitimate government during the March 30 local elections.

Lambasting the Gülen Movement, the prime minister said that his fight against the movement will continue if he takes the presidential seat.

Erdoğan noted that there are still infiltrators in governmental and judicial bodies that have been ignored by certain institution and ministries. He added that the nation knows those who ignored this.
RELATED TOPICS