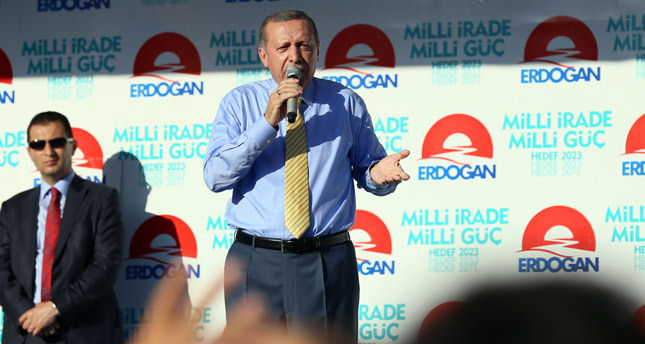 by AA
Jul 09, 2014 12:00 am
Addressing a huge crowd in the central Anatolian city of Tokat, Turkish Prime Minister and AK Party presidential candidate Recep Tayyip Erdoğan criticized the opposition parties' joint candidate former head of the Organization of Islamic Cooperation (OIC) Ekmeleddin İhsanoğlu's stance on foreign policy. Erdoğan stated that Turkey should not be unbiased on regional issues and stressed that Turkey will always side with victims both in the region and around the world, in every circumstance.

He said, while bans and violations existed in the old Turkey, freedom and rights have been upheld since the new Turkey era started by the AK Party. Citing that the AK Party is the only party that has won by a landslide for 12 years in Turkey's history, Erdoğan said that the party was established by the nation and it works for nation's sake alone. Speaking at an iftar event in Turkey's western city of Denizli on Tuesday, Erdoğan pledged to continue to combat with Gülen Movement, which infiltrated police and judiciary in order to overthrow legitimate government if he takes the presidency seat on Aug. 10.

Ahead of Turkey's first-ever presidential election that the president will be elected by a popular vote, Erdoğan continued his electoral campaign at a full steam. Erdoğan stated that Turkey will not only elect the president on Aug. 10 but also mark the beginning of a new era for Turkey's future. Vowing to keep serving Turkish nation and the citizens if he is elected as the president, Erdoğan said that Turkey witnessed political, economic and international crisis for years, but the country's future started to become brighter during the last 12 years that AK Party came to the power.

Denouncing Gülen Movement, Erdoğan asserted that Gülen Movement trapped both the nation and the government. Erdoğan added that he will never ever dread combatting with those infiltrators and he will follow this issue step by step if he is elected as the president. "We [the government] overcame all crises with the help of the nation's trust in us. There have been numerous traps against us in this process [AK Party's ruling term]. We were prepared some of those traps, but some of them surprised us such as Gülen Movement's coup attempt. That coup attempt was the ugliest and the most dangerous trap."