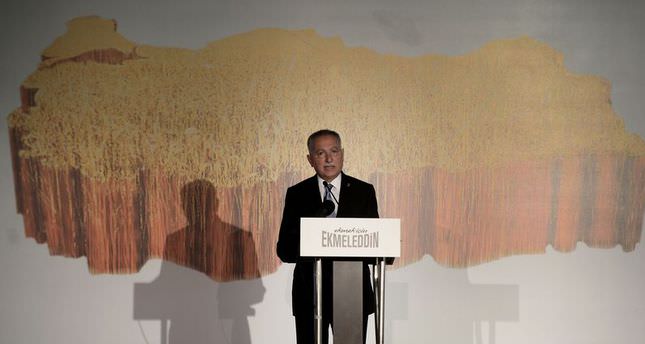 by Daily Sabah Jul 10, 2014 12:00 am
Ekmeleddin İhsanoğlu, the joint candidate of Turkey's main opposition parties has announced his campaign program on Thursday at a press conference organized in Istanbul.

"I am the presidential candidate of all people" İhsanoğlu exclaimed, stating that he is not close to or away from a specific party and that there are honest bureaucrats and technocrats in each party. He continued his speech by saying that he has a handful of seeds in his hand and he wants to plant these seeds. "Let me plant love so that love can spread" İhsanoğlu stated, who expressed he wants peace and the stop of fights and violence.

İhsanoğlu's campaign slogan was outlined as "Ekmeleddin for bread", and his campaign slogan consists of wheat field in the shape of the map of Turkey. Other slogans which will be used for the campaign include "Ekmeleddin to cultivate love, to cultivate prosperity and for bread." According to İhsanoğlu, bread was chosen as a symbol because it has a divine notion as it represents elbow grease, and a staple of the Turkish nation. Additionally, the campaign highlights the idea that İhsanoğlu is not only a single party's candidate but is the candidate of all Turkish people. On the other hand, it is argued that İhsanoğlu has worked for the perpetuity Islam while underlining his nationalist side.

In response to a question about his remarks when he stated Turkey should adopt a neutral stance regarding Israeli aggression towards Gaza which received wide-range criticism as more Palestinians are being killed, İhsanoğlu stated he supports peace in Palestine and was the first person to establish a ceasefire between Hamas and Al-Fatah while the campaign highlighted the idea that he is the only Turk to receive the order of Palestine. He refuted the claims that he stated Turkey should be neutral towards Israeli aggression and stated he supports the Palestinian cause and has served the Palestinian people for a long period.

İhsanoğlu also claimed the economic situation in Turkey was dire when he stated there is a significant amount of poor people in the country and the luxurious cars and roads portray a deceiving image as he claimed many people are in debt. On the other hand, he stated he is disadvantaged because his opponent Recep Tayyip Erdoğan is currently the prime minister and will allegedly benefit from this. "Wherever I go, I encounter people complaining about credit card debt which keeps increasing as interest adds up" said İhsanoğlu, who stated the president does not have financial authorities but can use his position and authority to cooperate with them to resolve the matter. "The president does not make roads but guides people to the right way" he said and added that decreasing the gap between the poor and the rich in Turkey is a matter of serious political commitment and understanding and should be resolved collectively regardless of the party.


İhsanoğlu is the joint candidate of the Republican People's Party (CHP) and the Nationalist Movement Party (MHP) and will be running against Selahattin Demirtaş from the People's Democratic Party (HDP) and Recep Tayyip Erdoğan from the AK Party. The first round of presidential elections will take place on August 10 when Turkish citizens will vote for their president for the first time.