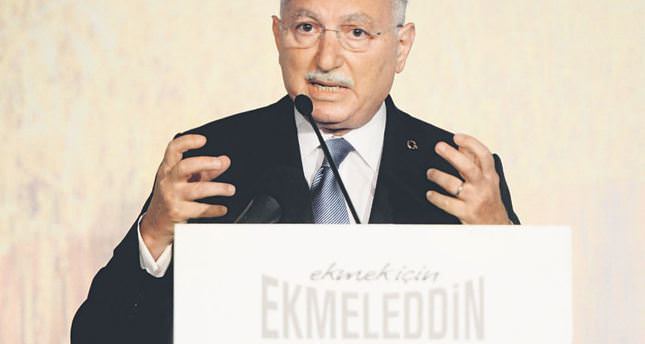 The joint candidate İhsanoğlu presented his roadmap for postelection era if elected as president. Yet he preferred remaining silent on certain questions

Ekmeleddin İhsanoğlu, the joint candidate of Turkey's main opposition parties yesterday at a press conference in Istanbul presented his election platform. He announced to the nation that his campaign motto would be "Ekmek için Ekmeleddin," which may mean both "For Bread, Vote Ekmeleddin" and "For Sowing, Vote Ekmeleddin." "I am the presidential candidate of all people," said İhsanoğlu, who added that a president directly elected by the people would have political power, contrary to previous presidents who were elected by Parliament.

He continued his speech by saying that he has a handful of seeds in his hand and he wants to plant these seeds. "Let me plant love so that love can spread" İhsanoğlu stated, who expressed he wants peace and the stop of fights and violence.

According to İhsanoğlu, bread was chosen as a symbol because it has a divine notion as it represents elbow grease, and a staple of the Turkish nation.

The campaign highlights the idea that İhsanoğlu is not only a single party's candidate but is the candidate of all Turkish people. On the other hand, it is argued that İhsanoğlu has worked for the perpetuity of Islam while underlining his nationalist side.

In response to a question about his remarks when he stated Turkey should adopt a neutral stance regarding Israeli aggression towards Gaza which received wide-range criticism as more Palestinians are being killed, İhsanoğlu stated he supports peace in Palestine and was the first person to establish a ceasefire between Hamas and Al-Fatah while the campaign highlighted the idea that he is the only Turk to receive the order of Palestine. He refuted the claims that he stated Turkey should be neutral towards Israeli aggression and stated he supports the Palestinian cause and has served the Palestinian people for a long period.

İhsanoğlu also claimed the economic situation in Turkey was dire when he stated there is a significant amount of poor people in the country and the luxurious cars and roads portray a deceiving image as he claimed many people are in debt. On the other hand, he stated he is disadvantaged because his opponent Recep Tayyip Erdoğan is currently the prime minister and will allegedly benefit from this. "Wherever I go, I encounter people complaining about credit card debt which keeps increasing as interest adds up" said İhsanoğlu, who stated the president does not have financial authorities but can use his position and authority to cooperate with them to resolve the matter. "The president does not make roads but guides people to the right way" he said and added that decreasing the gap between the poor and the rich in Turkey is a matter of serious political commitment and understanding and should be resolved collectively regardless of the party.

It was pointed out that İhsanoğlu left many important questions unanswered, causing further public curiosity regarding his political stance.

İhsanoğlu had already been criticized by his supporters for portraying a different stance than the political parties which nominated him, but this time caused further uncertainty by not answering several crucial questions during his press conference.

At first a reporter asked İhsanoğlu about criticisms he received for posing to cameras when holding a controversial ultra-nationalist magazine Türk Solu (Turkish Left), with his photo on the cover, during his election campaign at the iconic İstiklal Street. However, he avoided the questions and continued answering the next question. İhsanoğlu posing with Turkish Left sparked ire among Nationalist Movement Party (MHP) supporters.

The Türk Solu is known with its discriminative front pages against Kurds and hate speech against pro-MHP nationalists.

İhsanoğlu also kept silent on a question about his views on government and intelligence officials holding talks with PKK leader Abdullah Öcalan, who is jailed on İmralı Island off the coast of İstanbul. Many analysts believe that he aimed to not anger nationalist Turks by keeping silent over Öcalan question.

İhsanoğlu had also avoided speaking out his views on the Armenian issue, including country's relations with Armenia and his stance towards the 1915's tragic incidents.

Prime Minister Recep Tayyip Erdoğan took the first step toward a solution through sharing in Armenians' pain on April 24. PM Erdoğan had continuously offered to create a commission that would include Turkish and Armenian historians to delve into the 1915 incidents. The commission was to open Armenian, Turkish, British, German and Russian archives to shed light on the issue. If the alleged genocide was proven at the end of the commission's investigations, Turkey said it was ready to admit the occurrence. Yet Armenian officials did not accept the offer, putting forth several excuses. Turkey opened nearly 100,000 archives, including Foreign Ministry and Prime Ministry archives. Turkey also allows eligible researchers who meet requirements to search Turkish Army archives.

According to major public research companies' surveys, pro-Kurdish People's Democratic Party's (HDP) leader Selahattin Demirtaş will receive about 8 to 10 percent of the public's support for his presidential candidacy and İhsanoğlu is expected to receive about 35 to 40 percent. The most recent polls show that Prime Minister Recep Tayyip Erdoğan will receive above 50 percent in the first round of the election and avoid second round of voting.

İhsanoğlu is the joint candidate of the Republican People's Party (CHP) and the MHP and will be running against Selahattin Demirtaş from the People's Democratic Party (HDP) and Recep Tayyip Erdoğan from the AK Party. The first round of presidential elections will take place on August 10 when Turkish citizens will vote for their president for the first time.
Last Update: Jul 10, 2014 11:12 pm
RELATED TOPICS