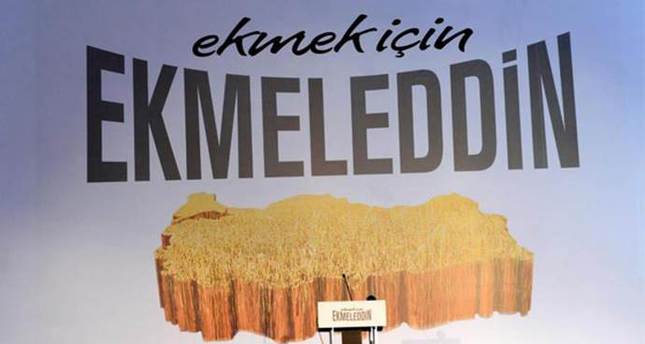 by Nurbanu Kızıl Jul 10, 2014 12:00 am
The revelation of opposition's joint presidential candidate Ekmeleddin İhsanoğlu's campaign program yesterday, during a press conference, at Çırağan Palace in Istanbul, has drawn wide-range of criticism due to its poor choice of campaign rhetoric and election slogans, which many people criticized for being absurd and uncreative.

The main campaign slogan is composed of Ekmeleddin İhsanoğlu's name which rhymes with "ekmek", which simply means bread in Turkish if used as a noun and to sow if used as a verb. Many expressed it was unnecessary to rhyme the joint presidential candidate's name with the party slogan, as it is not creative and sounds rather cheesy. On twitter users have criticized, the advertising agency leading İhsanoğlu's campaign for their poor choice and made fun of the slogan for being irrelevant. Others compared it to the slogan of a home appliance brand's TV ads which goes along the lines of "technology for life".

Sefa Karahan, an advertiser has told Daily Sabah that the campaign slogan and logo was a disappointment for many people as it contradicts İhsanoğlu's previous statements when he claimed the president would not actively participate in policymaking but now he sounds like he will actively work as a figure to address the country's needs.

Karahan expressed the slogan sounds like it was made just so that it could rhyme, not considering other important factors behind it to make it effective. "İhsanoğlu's statements do not seem to align with his slogan" said Karahan, who also expressed the corporate identity, typography of the slogan and the logo were rather weak.

He went on to state that the logo resembled the logo of ANAP, a political party, which was active in the 1990s and expressed it seems as though the team did not work with an experienced advertising agency to come up with the campaign details. On the other hand, Karahan suggested that a good political campaign would be one that uses sincere language and appeals to everyone while not focusing on the leader's self and ego. Likewise, it should entail a rhetoric that is not outdated and many can refer to, and should use key words.
Last Update: Jul 11, 2014 11:38 am
RELATED TOPICS