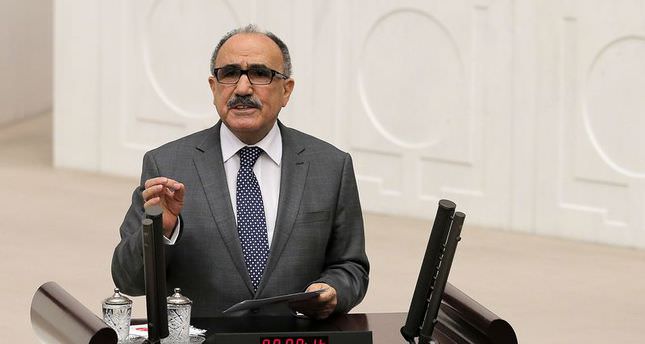 by Daily Sabah Jul 10, 2014 12:00 am
The Turkish Parliament convened on Tuesday to discuss a draft bill to rekindle a government initiative to end terrorism and improve minority rights. Speaking on the six-article bill titled "The Law to End Terrorism and Strengthen Social Integration" as part of the reconciliation process that started between Ankara and the Kurds in 2013 with an AK Party initiative, Deputy Prime Minister Beşir Atalay spoke on behalf of the government at the Turkish Grand National Assembly (TBMM). Atalay stated that the government's next step is to ensure the disarmament and rehabilitation of PKK militants.

He said that the government is attempting to solve the Kurdish issue using new measures, rather than those used in the past. Atalay stated that the government is about to reach a conclusion on the Kurdish question and added that disarmament and rehabilitation are the basis of the reconciliation process. Saying that the reconciliation process is "above politics," Atalay urged all political parties to compromise and ensure solidarity on the issue. Atalay said that since the beginning of the reconciliation process, there have been no deaths in eastern Turkey as a result of clashes with the PKK. He added that economic development and normalization are beginning to be observed.

The Gülen Movement, headed by U.S.-based Fethullah Gülen, is seen as one of the most determined critics of the process. The group, through prosecutors and judges linked to it, has tried to sabotage the process in the past. Touching on citizens' support of the process, Atalay said that families of Turkish soldiers who lost their lives during the conflict between the Turkish state and the PKK, which took up arms against the country in order to carve out a separate state in southeastern Turkey, support the process to finalize this decades-long conflict. Also, Atalay stated that Turkey is pursuing the reconciliation process on its own and no international medium is involved in the process.

The draft bill said that the reconciliation process is about putting weapons aside and choosing words, thoughts and politics. The draft bill stipulates that necessary steps in the fields of politics, socio-economy, psychology, culture and security will be taken to end terrorist activities and uphold social unity.

Through the bill, the government will appoint certain institutions or individuals to engage in dialogue with Kurdish circles both in the country and abroad. The legislation also makes it the government's responsibility to rehabilitate militants who lay down their weapons.

Last Friday, the Parliament's internal affairs commission approved the "The Law to End Terrorism and Strengthen Social Integration." The government announced that due to the reform package, it will not end the legislative year on June 30 this year. Thus, members of the Parliament have said they will work efficiently to pass the reform package to show its commitment to the process and bring hope to the families of children who
were kidnapped by the PKK.
Last Update: Jul 10, 2014 11:00 am
RELATED TOPICS