We'll take up arms in case of a Kurdistan, says Kılıçdaroğlu 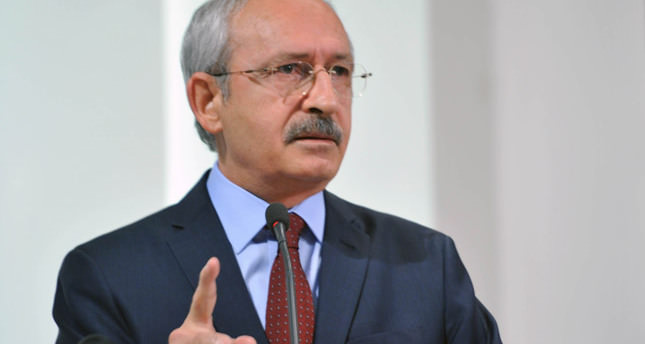 by Ali Ünal Jul 10, 2014 12:00 am
The leader of Turkey's main opposition Republican People's Party (CHP), Kemal Kılıçdaroğlu, disappointed his constituents, who expect major shifts from the CHP's Kemalist roots to a new agenda that embraces greater individual liberties, enhances press freedom and reinforces rights for Turkey's minorities, such as Kurds and Alevis.

Kılıçdaroğlu, who pledged to make "fundamental changes" in the party and began discourse on the "new CHP," said in a live TV interview on Wednesday night that they would take up arms in the event an independent Kurdish state is formed amid the ongoing crisis in Iraq.

Responding to the question, "What would you do in case of the establishment of a Kurdish state and danger of dividing Turkey?" Kılıçdaroğlu replied that they would arm themselves to protect Turkey's unity. "If necessary we would get arms in our hands to avoid the division of Turkey,"
Kılıçdaroğlu said.

Mustafa Altunoğlu, a political scientist at Anadolu University recalled that Kılıçdaroğlu had proudly declared that his party was adapting to the changes in the world and asked the audience to stop thinking of the party as one and the same with the CHP of the 1930s in a recent address at the Tigris Dialogues meeting in Diyarbakır. "It is no secret that reform efforts within the CHP have been on the table for quite some time to build a pro-liberty and pro-democracy platform for social democrats who respect the people's religious and cultural values," Altunoğlu noted. "But how the party relates to the state remains largely unaltered - which is why the leftist turn of the 1960s has so much in common with the nomination of Ekmeleddin İhsanoğlu as their presidential candidate."

Adding that the main opposition party continued to position itself as a safe haven by fuelling fears about Kurdish separatism and sharia law, he argued that Kılıçdaroğlu sought to appeal to concerned citizens during a live TV interview earlier this week by stating that they would take up arms in case an independent Kurdish state emerged out of the ongoing crisis in Iraq. "At the end of the day, the CHP still depends on fear as the cornerstone of its platform, and therefore remains closely committed to its heritage," Altunoğlu said.

CHP administrations during the single-party period of the Turkish Republic systematically excluded Kurds, Alevis and religious people from the political process and their demands were ignored by the government. Therefore, from the founding of the Republic to 1938, Turkey faced 18 revolts, 17 of which occurred in eastern Anatolia and 16 involved Kurds and Alevis. The Zilan Massacre that took place in the province of Van in 1930 is a good example of showing the mind-set of CHP administrations during the early years of the Republic. The Zilan Massacre refers to the massacre of thousands of Kurdish residents in the Zilan Valley of Turkey in 1930 during the Ararat rebellion.

The number of people killed in the massacre varies from source to source. According to Sedat Ulugana the author of the book "The Agri Kurdish Rebellion and the Zilan Massacre," published in 2010, the number of people killed in Zilan was more than that of Dersim, but the government doesn't want this to be known because then it might have to pay compensation to victims' families. The Dersim Massacre can be considered as another example. A military campaign took place in parts of the province of Tunceli, formerly Dersim, from March 1937 to September 1938 against the Alevis and Kurds and resulted in a particularly high death toll of many thousands of civilian victims. In 2011 Prime Minister Recep Tayyip Erdoğan apologized on behalf of the Turkish state for the Dersim Massacre in the predominantly Alevi region of Dersim, but said the main opposition CHP, which was the only political party at the time, is the actual culprit and called on the party's current leader to apologize for the incident on behalf of the CHP.
Last Update: Jul 11, 2014 11:58 am
RELATED TOPICS