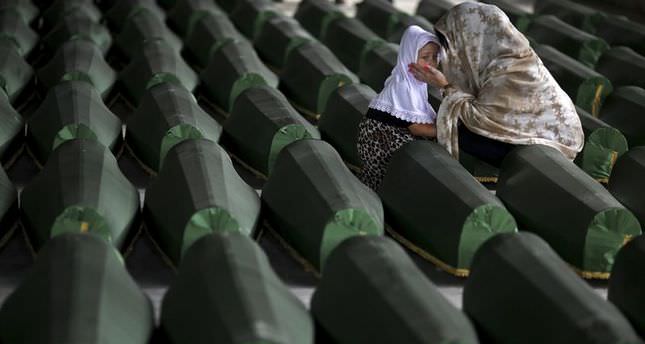 by AA Jul 11, 2014 12:00 am
Turkey will never forget the genocide against Muslim Bosnians in Srebrenica in July 1995, Turkish Foreign Minister said on his Twitter account on Friday, for the 19th anniversary of the Srebrenica genocide in Bosnia.

During the ethnic war in Bosnia, Srebrenica, which had been declared as safe zone by United Nations, was captured by Bosnian Serbian troops under the command of Gen. Ratko Mladic on July 11, 1995. Dutch soldiers serving under UN command left the area, leaving the the Bosniak Muslims at the mercy of Mladic's troops.

"I commemorate all martyrs with mercy at the anniversary of this inhumane massacre of the twentieth century in Srebrenica. Even though everyone forgets the Srebrenica massacre, we will not forget it," FM Davutoglu said during his official visit to Uzbekistan.

The minister also underlined that Turkey will learn lessons from the international community's past mistakes and continue to work for peace and stability in the Balkans.

Meanwhile, the newly identified bodies of 175 Srebrenica victims will be reburied in Potocari cemetery, in eastern Bosnia and Herzegovina on Friday.

Serbian President Tomislav Nikolic apologized last year for "all crimes committed by Serbs" during the war in Bosnia. But he refused to call the massacre in Srebrenica a "genocide."