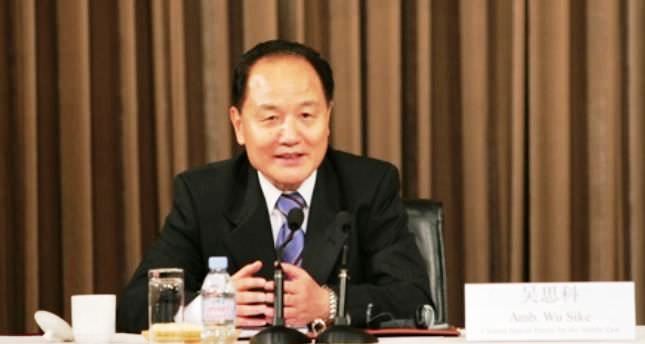 by Ali Ünal Jul 12, 2014 12:00 am
China's Special Envoy on the Middle East Wu Sike visited Turkey as part of a wider tour of the region and met with deputy undersecretary of the Ministry of Foreign Affairs Ömer Önhon and National Security Council Secretary-General Muammer Türker.

Prior to his visit to Turkey, Special Envoy Wu visited Baghdad and met with Iraqi Prime Minister Nouri al-Maliki as well as Deputy Prime Minister Saleh al-Mutlaw and Foreign Minister Hoshyar Zebari. Regarding his visit to Iraq, Wu stressed China's high attention to developments there and expressed China's support for the central government to safeguard national sovereignty, independence and to combat terrorism - especially the Islamic State of Iraq and al-Sham (ISIS) - in a press conference yesterday in Ankara.

Wu said China hopes that Iraq will be able to establish an inclusive government. "We hope that all factions in Iraq can unite together, build up consensus and establish an inclusive government at an early date," he said. As to the unity of Iraq, Wu expressed his contentedness that China and Turkey are in the same position and underlined the importance of cooperation with Turkey to maintain stability in the region. Wu drew attention to links between the effects of regional issues, particularly the situation in Syria, and expressed his wish that the international community accelerate its response to the Syrian and other regional issues through political solutions by the formation of a consensus and work together in the fight against terrorism. "Terrorism and extremist elements are the common enemy of the entire world. It is our common duty to fight in this field," he said.

China's newly appointed ambassador Yu Hongyang also attended the press conference. After his visit to Turkey, Wu will visit Iran as the next leg of his Middle East tour.
RELATED TOPICS