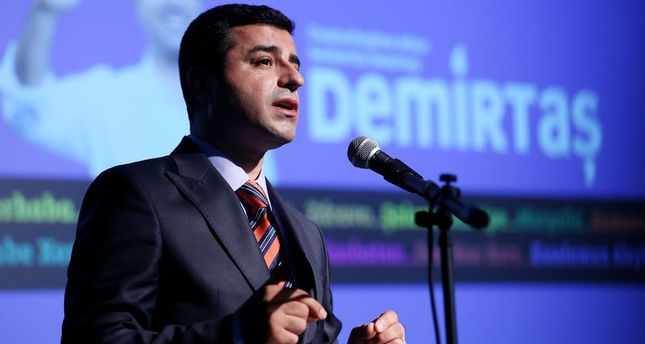 by Daily Sabah Jul 15, 2014 12:00 am
Selahattin Demirtaş, the leader of People's Democratic Party (HDP) on Tuesday announced his campaign program at Şişli Community Center in Istanbul. Addressing a modest audience, Demirtaş touched upon the significance of changing Turkey's constitution and called it "outdated".

"It is impossible to delay the complete change of this constitution which sanctifies the state and disregards the people" said Demirtaş, who expressed it is necessary to pave the way for everyone to live their lives freely as they wish. He added that the government should allow people to worship in their mother tongue and abolish the state-backed Directorate of Religious Affairs.

Demirtaş explained his campaign currently receives a serious amount of financial support from the people while noting they are not receiving any assistance from the state. "This is a clear indicator that the election race will proceed in an undemocratic manner" said Demirtaş, who claimed that the actions and promises do not seem like they will embrace the country as a whole. He criticized the government for having an inconvenient and rooted structure and stated the ideal president should be someone who will empathize with the people. "For us, the best government is the one that controls the least" said Demirtaş, who stated the new constitution should also be made by the people rather than the government.

On the other hand, Demirtaş made a radical statement when he said "May God help Recep Tayyip Erdoğan if I win and become the president" and accused Erdoğan of being dishonest. He also criticized the nomination process of presidential candidates for being undemocratic based on the grounds that the people could not directly nominate their candidates. He claimed that AK Party's candidate was determined by one person, Erdoğan himself while Ekmeleddin İhsanoğlu, the joint candidate of opposition parties was allegedly determined by two people. Demirtaş stated HDP's nomination process was the most democratic because they discussed it as a party and came up with his name. He stated democratization was crucial for the reconciliation process to resolve the Kurdish question.

Selahattin Demirtaş was elected as a deputy in 2007 but was sentenced to ten months imprisonment in 2010 for having ties to the PKK but the sentence was suspended due to his parliamentary immunity.