Nothing to be done without first consulting Turkey, says Barzani 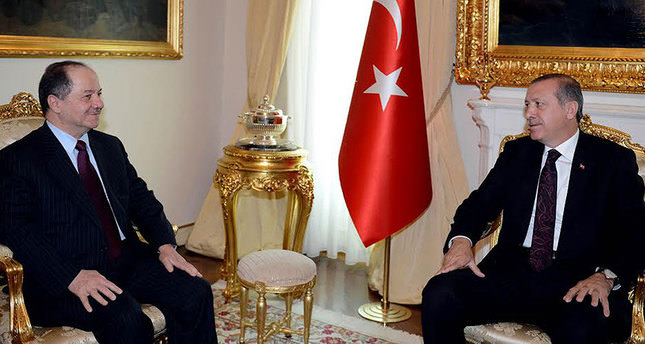 Kurdistan Regional Government (KRG) President Massoud Barzani, in his meetings with top Turkish officials on Monday, said the KRG will not declare independence and will not take any steps without first consulting Turkey. Barzani was received by Turkish President Abdullah Gül, Prime Minister Recep Tayyip Erdoğan and Foreign Minister Ahmet Davutoğlu to discuss the recent developments in Iraq. The Islamic State of Iraq and al-Sham (ISIS), which abducted 49 Turkish consulate staff, has been posing a threat to the autonomous Kurdish region with its militants clashing with Kurdish peshmerga forces. The central Iraqi government led by Nouri al-Maliki, who is accused of fueling sectarian divisions in the country and allowing ISIS to grow in strength before becoming a threat, has failed to end the crisis. The KRG has been deliberating a referendum on independence amid the conflict to separate their territory from Iraq and secure their borders.

However, Turkey, the U.S. and U.K. have opposed this idea and said that it is not the best time to declare independence as it will deepen the chaos.
According to sources, Turkey repeated its stance on the independence issue and Barzani offered two promises and two demands. He promised that the KRG will not attempt to declare independence and that they will not take any steps without informing Turkey. After saying that the KRG will make efforts to help the Turkmens who have fled from their homes due to the ISIS threat, Barzani said he has two requests from Turkey. The KRG wants Turkey to increase cooperation against ISIS on the ground and against the Maliki government in the international arena.

Iraq continues to be engulfed in chaos while trying to protect its territorial integrity. Within this chaotic environment, scenarios in which the Iraqi Kurds in the north would be independent are much more possible now. This decades-old dream of the Kurdish people was alluded to by Barzani in his many remarks. In response to him, U.S. State Department spokeswoman Jen Psaki said, "A united Iraq is a stronger Iraq and the focus should be on the existential threat that all Iraqis and the people in the region face, which is the threat of ISIS, and we should not give an opening to a horrific terrorist group by being divided at this critical moment." Instead of an independent Kurdistan, Turkey wants Kurdish officials to side with Sunni tribes. It was stated that in Mosul and other Sunni-majority areas, the people, including Turkmens, are vulnerable against any attack coming from groups such as ISIS. Turkey also is disappointed with Maliki's Shiite-led Iraqi central government due to its sectarian policies and its ignoring of the rights and demands of other social groups including the Kurds.
Last Update: Jul 16, 2014 11:51 am
RELATED TOPICS