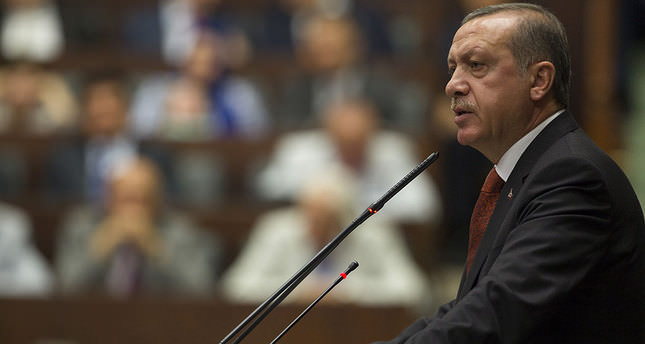 by AA Jul 16, 2014 12:00 am
The two-state solution between Palestine and Israel for a lasting peace brokered by the United States in the Middle East consistently fails because there is a lack of sincerity, said Turkey's Prime Minister Tuesday at AK Party Headquarters in Ankara.

"Depriving Palestinians of human dignity is the biggest roadblock to peace in the Middle East," he said. "Women and children are being brutally killed in Gaza by Israel", Erdogan said adding "Israel and the west are using disinformation to legitimize the killing of innocent Palestinians."

The Turkish premier also reiterated that a normalization of relations between Turkey and Israel should not be expected unless Israel stops its offensives against the Palestinians. Israeli warplanes have struck hundreds of civilian residential areas across the besieged enclave, which is home to around 1.8 million Palestinians. Israeli ground troops remain massed on the territory's borders in advance of a potential ground assault. At least 194 Palestinians have been killed and more than 1400 others injured in unrelenting Israeli airstrikes on the Gaza Strip since last Monday.

Erdogan also made reference to Iraq in his speech and said the Iraqi constitution has been violated and people have been deprived of their fair share of resources in the country, "Iraqi central government is responsible for the recent chaos in the country and the activities of ISIS – Islamic State of Iraq and al-Sham - are affecting us and the region, our citizens are being kept hostages." ISIS abducted all 49 staff members of the Turkish Consulate in Mosul - including women and children - after seizing control of Mosul on June 10.
Last Update: Jul 16, 2014 12:15 pm
RELATED TOPICS