PM Erdoğan: The people are uncomfortable with joint candidate 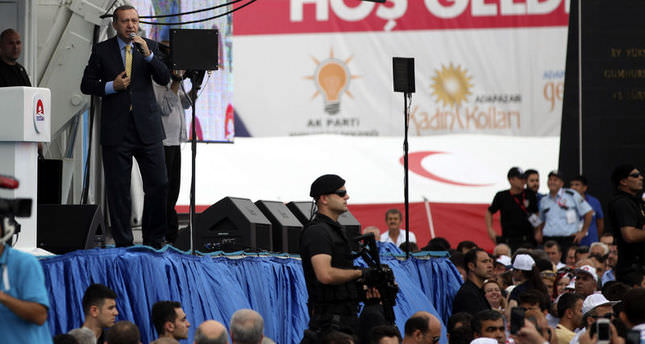 by Daily Sabah Jul 16, 2014 12:00 am
Prime Minister Erdoğan, who is also a presidential candidate for the upcoming elections, addressed the people on Wednesday during a meeting in the province of Sakarya.

The Prime Minister commented on the opposition parties' joint candidate, saying that even they themselves are not happy with the candidate. He continued by saying people are uncomfortable with the alliance of the Gulen Movement in Pennsylvania and Turkey's main opposition the Republican People's Party (CHP).

Erdoğan also addressed the ever growing number of Syrian refugees saying, "We cannot abandon the one million 150 thousand Syrian refugees in Turkey to brutal bombardments in Syria." Turkey's PM also said, "Provocations against our Syrian brothers in Turkey will not be tolerated."