President Gül: I will continue to serve my country 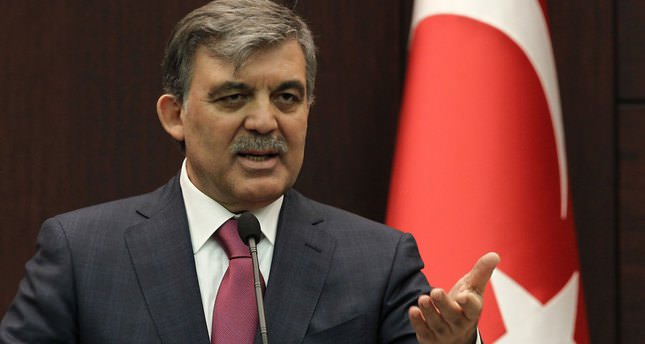 by Daily Sabah Jul 16, 2014 12:00 am
Turkish President Abdullah Gül, who will leave his post after the Aug. 10 presidential election, said that serving the nation is his fundamental duty and he will continue serving after his term ends in some capacity, possibly a new direction, in response to speculations on his continuation in active politics.

Speaking at an iftar event at the Union of Chambers and Commodity Exchanges of Turkey, Gül stated on Monday that today's Turkey is much more different than the Turkey in 2002 when the Justice and Development Party (AK Party) first came to power. Gül added that the developments in the country over the last 12 years are relevant not only to the economy, but also to radical reforms and structural changes.

Gül said, "For seven years, I served my country as the head of the state. I did my best to embrace all of our citizens from east to the west. I even opened my doors for those who protested my presidency. I believe that I managed to bind the state and the nation together." Saying that Turkey had problems 12 years ago, the president noted that the reforms turned Turkey into a stable country. Referring to economic developments, Gül said that political norms, democratic criteria and legal structures should be upheld to ensure Turkey's development.

Speaking of the reconciliation process that started between Ankara and Kurds in 2013 and gained new momentum with a draft bill to ensure the return to society of PKK militants, Gül pointed out that the Kurdish question has been solved and Turkey should continue to solve its other chronic issues. He also said the reforms to improve the country's educational system and the research-development bill on education which he signed last week, bear great significance. The AK Party announced Prime Minister Recep Tayyip Erdoğan as its presidential candidate and the Republican People's Party (CHP) and Nationalist Movement Party (MHP) nominated former secretary-general of the Organization of Islamic Cooperation (OIC) Ekmeleddin İhsanoğlu as their joint candidate. Ahead of the upcoming election, one of the most asked questions is who will take the prime ministry seat if Erdoğan is elected president. Ruling out swapping jobs with the prime minister, Gül, the co-founder of the AK Party, stated in April that he does not have a political plan for future.

Gül, giving the green light to the AK Party, remarked in July, "It's not the right time to discuss these. After all, I am one of the founders of the AK Party. These are issues that we'll discuss when the time comes." Gül is the first president to have visited 81 cities across the country during his term in office. Since his seven-year term began, he has received the highest number of individual appeals. Some 293,000 citizens petitioned the president concerning financial aid, employment, justice, education and cultural issues. About 225,000 of them were reported to have yielded results.
Last Update: Jul 16, 2014 12:56 pm
RELATED TOPICS