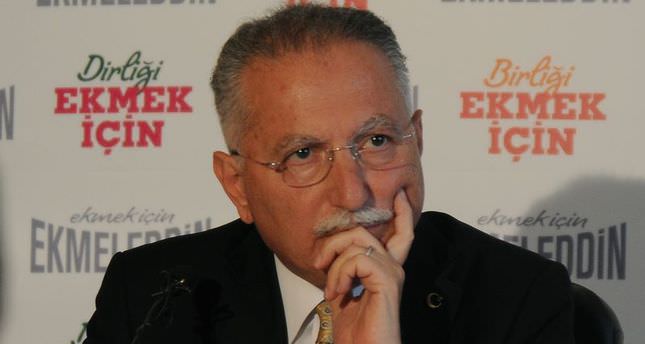 by Daily Sabah Jul 17, 2014 12:00 am
Research companies continue to gather information about public opinion prior to the presidential elections, which will take place on August 10; and recently, Strategic Research and Consultation Company (SAD) conducted a survey and found out that a significant portion of the electorates of the Republican People's Party (CHP) and the Nationalist Movement Party (MHP) have not embraced joint candidate Ekmeleddin İhsanoğlu's presidential candidacy.

According to SAD's survey conducted between July 11 to 13 in 12 cities amongst 1500 people, 35 percent of CHP's electorates have expressed they have not embraced Ekmeleddin İhsanoğlu as a presidential candidate while 40 percent of MHP's electorate stated the same. 63 percent of those surveyed said 'no' to the question asking whether İhsanoğlu's candidacy was accepted in the eyes of the public. 61,5 percent said the elections would be finalized in the first round.

On the other hand, 50 percent of those surveyed said Recep Tayyip Erdoğan in response to "who is the most suitable candidate for Turkey's future?". 61 percent noted Erdoğan would win the elections in the first round by 51 to 54 percent. Between 43 to 47 percent said they will certainly vote for Erdoğan whereas, 32 to 36 percent stated they will certainly vote for İhsanoğlu.

The survey gained importance after CHP's leader Kemal Kılıçdaroğlu adopted a harsh rhetoric and said to his electorates on Monday "If you want to live freely, go on vacation freely and if you do not want anyone to intervene in your life, you have to go to the ballot box and vote for Ekmeleddin İhsanoğlu as a matter of democracy: this is not a joke!"

The remarks received wide-range criticism as Kılıçdaroğlu was banging his fist on the table when he spoke, which for many resembled authoritarian gestures. The survey noted that 11 percent of the electorates would be on vacation during the elections while 7, 7 percent stated they will not interrupt their vacation and go to the ballot box to the disappointment of Kılıçdaroğlu.

His remarks have drawn criticism from Erdoğan who accused Kılıçdaroğlu of adopting a rude and harsh stance against CHP voters and giving strict orders to its grassroots. Erdoğan also noted Kılıçdaroğlu was responsible for forcefully imposing a candidate who has a different worldview compared to his party's support base, which may potentially risk his position as the party leader if İhsanoğlu loses the elections on August 10.

İhsanoğlu also received backlash from many MHP supporters when he recently held a controversial ultra-nationalist magazine Türk Solu (Turkish Left) -- with his photo on the cover -- during his election campaign at the iconic Istiklal Street. Many claimed that the 71-year-old candidate -- who stepped into Turkish soil for the first time at the age of 27 -- has no sufficient knowledge about Turkey or the anti-MHP magazine that he held in his hand.

The MHP is known for its strong objection to the reconciliation process, which is aimed at ending a decades-long conflict in southeast Turkey by disarming the PKK while the BDP is accused of causing difficulties throughout the crucial process.

İhsanoğlu also drew criticism from conservative circles for his continues pro-secularism remarks and for staying quiet over Syrian regime and Egypt's military coup during his presidency at the Organizatin of Islamic Conference (OIC).