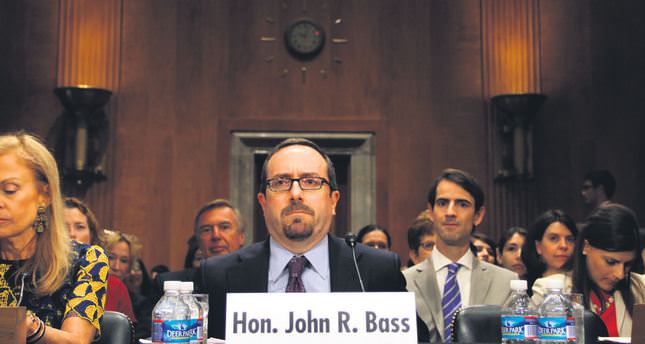 U.S. Senator John McCain put nominee for the U.S. ambassadorship to Ankara under pressure at a hearing in Washington, urging him to say he agrees that Turkey is drifting towards authoritarianism under PM Erdoğan

After minutes of intense congressional questioning, John Bass - who has been nominated by the Obama administration as new U.S. ambassador to Ankara - is forced to say that Turkey is drifting towards authoritarianism under Prime Minister Recep Tayyip Erdoğan. U.S. Senator John McCain put nominee John Bass under pressure at a Congressional hearing in Washington, D.C. on Tuesday during a terse back and forth over Turkey's human rights record.

McCain grilled Bass for two minutes at the hearing beginning with the question: "Do you believe that many of the actions that [Erdoğan has] taken, suppressing social media, YouTube and Twitter, and restrictions on Internet freedom and independent media, is a drift towards authoritarianism?"

As Bass hesitated, McCain added, "You are putting your nomination in jeopardy by not answering the question." Bass deferred to answer the question for two minutes, as McCain remained insistent on a "yes" or "no" answer. Bass finally said, "It's a drift in that direction, yes, Senator."

"Thank you. It took 3 minutes and 25 seconds," McCain said in response to Bass, who eventually agreed with McCain's negative views of Erdoğan.
In an interview with Daily Sabah, Director of the Center for Middle Eastern Strategic Studies (ORSAM) Şaban Kardaş stated that McCain's pressure was actually his own stance against the Obama administration and a show of power. Kardaş added that Bass' words would not harm Turkey's relations with the U.S. and it would actually be forgotten in days. He also said that Bass had given constructive messages throughout his written statement, but he had to accept McCain's words to avoid harming his nomination.

Bass read a written statement during his testimony, "I pledge to work with all of you to protect and advance our interests by promoting security, prosperity, democracy and human rights - both in Turkey and in the many places beyond its borders where we work together."

McCain asked Bass whether he is concerned about Erdoğan's desire to replace the military drawn constitution to a civilian one. "The prime minister is the leader of the democratically elected parliamentary democracy. We'll obviously look closely at whatever steps he takes," Bass replied.
In response to a question from European Affairs Subcommittee chairman Chris Murphy, Bass said that it would be very important to "find ways to try to influence the discussion in Turkey in a way that shows the potential consequences for Turks if they continue down a path that would make Turkey less democratic."

In an earlier testimony, Bass said that if confirmed, he would urge the Turkish government to fully integrate its Kurdish community and also its minority groups - to reopen the Greek Orthodox Halki Seminary, which the government shut down in 1971. U.S. ambassadors are nominated by the president and confirmed by the Senate.

Bass served as U.S. ambassador to Georgia from 2009 to 2012 and is currently the Executive Secretary of State. He has worked on Turkey, Cyprus and NATO-Russia negotiations during his time with the U.S. State Department. Washington's current Ankara envoy, Francis J. Ricciardone, has served in the post since Jan. 1, 2011.
Last Update: Jul 17, 2014 12:37 pm
RELATED TOPICS