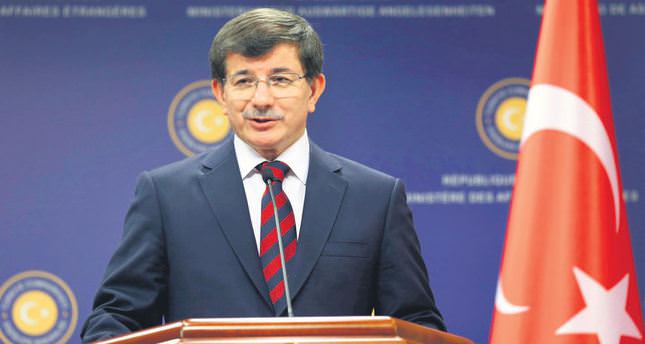 "I have never taken the Israeli foreign minister [Lieberman] seriously," Foreign Minister Davutoğlu said as his Israeli counterpart accused Turkey and Qatar of sabotaging the ceasefire proposal by Egypt's el-Sissi

Turkish Foreign Minister Ahmet Davutoğlu yesterday dismissed Israeli Foreign Minister Avigdor Lieberman's accusations that Turkey and Qatar attempted to "sabotage" a Gaza cease-fire proposal drafted in Egypt. "I have never taken the Israeli foreign minister [Lieberman] seriously," Davutoğlu said in a televised interview on Thursday afternoon. "How can I take someone who talks about cleansing Palestinians from invaded areas seriously?" he added.

After killing over 230 people in Gaza, Israel's Foreign Minister Avigdor Lieberman on Wednesday accused Turkey and Qatar of sabotaging the ceasefire proposal Egypt drafted for Israel and Hamas earlier this week, in order to promote themselves as mediators. According to a report by the Israeli newspaper Haaretz, Liberman told Norwegian counterpart Borg Brende that Palestine's Resistance group Hamas lied when it said Cairo had not sent them the ceasefire proposal, which Israel initially accepted.

He said Egyptian intelligence officials had given the details of the initiative to Mousa Abu-Marzouk, head of the Hamas mission in Cairo. However, Hamas announced that they were not consulted when Egypt drew the lines of the ceasefire and rejected the proposal for being left out of the reconciliation. "Hamas was ready to consider the Egyptian proposal favorably but Qatar wanted to screw the Egyptians and told them not to accept it," Lieberman told Brende, Haaretz learned. Liberman continued his accusations and said all Qatar's moves were coordinated with Turkey and both these states are pushing Hamas leaders not to accept the Egyptian proposals.

Lieberman's accusations came a day after Rashid al-Ghannushi - the leader of the En-Nahda Movement of Tunisia - said Turkey is closely working with leaders of Qatar, Tunisia and France to put an immediate end to Israeli aggression in the Gaza Strip.

Hamas has set out the conditions it requires before signing a ceasefire agreement in Gaza. Lifting the economic blockade on Gaza is one of the first conditions, followed by reopening the Rafah border crossing between Gaza and Egypt. The crossing is Gaza's only window to the outside world not under Israeli control but Egypt generally only opens the crossing for exceptional cases and for limited periods.

The release of Palestinian prisoners jailed in Israeli prisons since June 12 and expanding the limited fishing area in Gaza are other conditions that the group demands. Furthermore, Hamas' conditions also require Israel to not intervene in Palestine's unity government, unveiled in June following a reconciliation between Hamas and rivals Fatah.

At least 230 Palestinians, mostly civilians, have been killed and more than 1,698 injured since Israel launched Operation Protective Edge more than a week ago.

Speaking at an iftar dinner on Wednesday, Turkish Prime Minister Recep Tayyip Erdoğan reiterated his condemnation of the international community for its failure to stop Israel's attacks on Gaza and touched on the fact that such comments do not promote his popularity worldwide. "The prime minister of the Republic of Turkey is surely not liked. Of course he won't be liked. Where in the world are those who tell the truth liked? But we will continue to tell the truth," he said.

Erdoğan added that "Israel and the West are using disinformation to legitimize the killing of innocent Palestinians." He also called on the international community to support Gaza and said that the U.N. has failed to do what it was founded to do. "If the U.N. cannot do their job and settle world peace, they have to check and review themselves," he said.