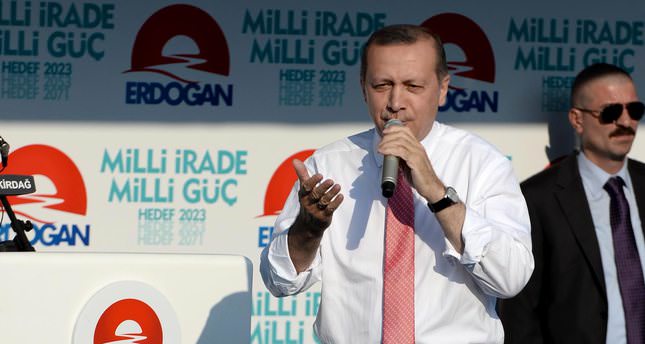 by AA Jul 18, 2014 12:00 am
Turkey's Prime Minister Recep Tayyip Erdogan said Friday that Turkey, during his term, will never think of a positive approach towards Israel.

"Israel is a country which threatens peace in the Middle East, and has never been on the side of peace," he told reporters following Friday prayers in Istanbul.

"Israel has been terrorizing Gaza, and carrying out genocide. It does not want a national consensus government between Fatah and Hamas, does not want to see a united Palestine. "

His statements followed an announcement from the Israeli Foreign Ministry on Friday that it would reduce its diplomatic presence in Turkey.

Israel has reacted by scaling back its diplomatic missions in Ankara following angry demonstrations outside its embassies and consulates in the capital and Istanbul last night. The demonstrations were over its ongoing military attack in the Gaza Strip, in which at least 264 Palestinians – mostly civilians – have been killed so far.

The ongoing mobilization, dubbed "Operation Protective Edge," is Israel's third major offensive in the Gaza Strip – home to some 1.8 million Palestinians – in the last six years.

Turkish PM Erdogan called on the Islamic world to take a stand against Israel. "Unless the Muslim world clearly takes up a position against Israel, many such problems will continue," he said.

He stressed that Turkey has a clear stance on the Gaza issue: "Our relations [with Israel] are almost at zero point; and normalization seems impossible under these circumstances."

Concerning the Mavi Marmara incident with Israel, after a Turkish-owned relief ship sailed into international waters off Gaza to deliver humanitarian aid, Erdogan said the last condition for normalization, the lifting the embargo on Gaza, had not happened.

Pointing to Egypt's proposed ceasefire between Gaza-based Palestinian factions and Israel on Monday, Erdogan said it was all efforts to legitimize the regime in Egypt: "Egypt is not a party in this issue".

While Israel initially accepted the Egyptian proposal, Palestinian groups Hamas and Islamic Jihad said that the plan did not meet "conditions of the resistance".

Israeli attacks in Gaza are disturbing for many Jews all around the world, the Turkish PM said, adding he will meet Palestinian president Mahmoud Abbas on Friday evening in Istanbul to discuss the latest developments.

Abbas is in Turkey as part of a two-day official visit at the invitation of Erdogan. Meetings will focus on Israeli strikes on the Gaza Strip and Palestine-Turkey relations.