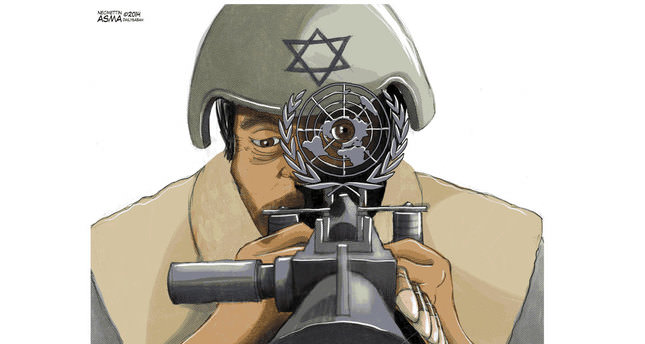 by Sena Alkan Jul 18, 2014 12:00 am
Turkey's Foreign Ministry has forwarded an initiative to put an end to the killing of scores of Palestinian civilians in the Gaza Strip and called for emergency meetings in international organizations, including the U.N.'s related bodies and Organization of Islamic Cooperation (OIC), to bring an end to the violence.

In reference to the five-hour humanitarian ceasefire on Thursday that allowed the delivery of humanitarian aid, Turkish Foreign Minister Ahmet Davutoğlu on Friday stated that a permanent ceasefire must be agreed upon at the end of negotiations, not unilateral ceasefire.

"As Turkey, we have several goals. The first is an urgent stop of this [Israeli] aggression. There is no way to explain this massacre of Palestinian women and children. We are determined to [press the] international community to halt this attack."

Davutoğlu late on July 17 said that Turkey called for an open emergency meeting in the U.N. Security Council, OIC and U.N. Commission on Human Rights, to stop Israel's ground operation in the Gaza Strip.

Ankara began work to halt Israeli aggression following the Israeli military's announcement on Thursday that it had launched a ground operation in the Gaza Strip.

"We [Turkey] vehemently condemn the ground operation launched by Israel into Gaza tonight following its inhuman murders by air strikes. The conscience of humanity is being tested once again with the Palestinian issue," Davutoğlu announced on his Twitter account.

Stating that Turkey's efforts to halt the Israeli attack are ongoing, the foreign minister said that he had a phone conversation with U.N. Secretary-General Ban-Ki Moon and called for an emergency meeting on Gaza. After speaking with the Secretary-General of OIC Iyad Madani, Davutoğlu told the press that he discussed possible steps that could be taken by the OIC with Madani.

Davutoğlu also spoke with U.S. Secretary of State John Kerry over the phone and explained the indignation in Turkey and across the Islamic world over Israeli attacks targeting Gaza.

"We exchanged views on reaching a lasting ceasefire immediately which can be accepted by Palestinians. I expressed our demand for an immediate halt to Israeli attacks," said the foreign minister.

Davutoğlu added that he also contacted Qatar's Foreign Minister Khalid al-Attiyah and Turkey's contact with Hamas and Fatah officials has also been ongoing for the last few days.

"We expect a call from countries to ask for a stop to Israel's lawlessness," said the foreign minister, urging the international community and world powers to take action against Israeli aggression.

Ahead of Davutoğlu's demand of holding an emergency meeting, Ban-Ki Moon on Thursday urged Israel to do far more to spare civilians in Gaza.

"I regret that despite my repeated urgings, and those of many regional and world leaders together, an already dangerous conflict has now escalated even further," the U.N. chief said.

Describing the death of four boys in an Israeli strike on Wednesday at a Gaza City beach as "appalling," Ban-Ki Moon said that there can be no military solution to the conflict.

On Thursday, the Israeli army launched a ground operation against the besieged Gaza Strip following 11 days of relentless airstrikes with the ostensive aim of halting rocket fire from the Gaza Strip. According to a Palestinian Health Ministry official, the assault has thus far resulted in the deaths of 246 Palestinians and 1,860 injuries.