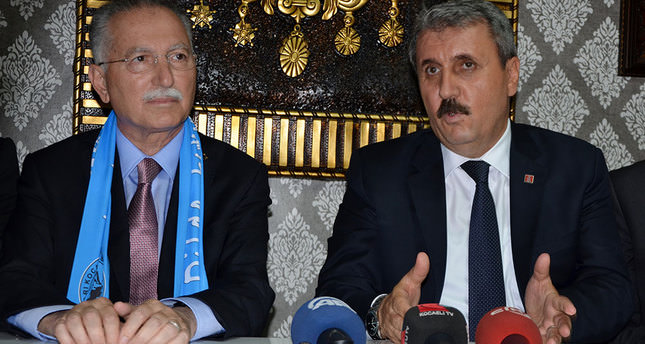 by Daily Sabah Jul 20, 2014 12:00 am
The leader of the Grand Unity Party (BBP) announced that Serkan Tüzün, chairman of the youth branch of the BBP, has been dismissed from his role for not backing his party's decision of supporting joint candidate Ekmeleddin İhsanoğlu in the Aug. 10 presidential election.

İhsanoğlu received backlash from nationalist BBP voters when he recently held up a controversial ultra-nationalist magazine Türk Solu (Turkish Left) – with his photo on the cover – during his election campaign on the iconic İstiklal Avenue. Many claimed that the 71-year-old doesn't have sufficient knowledge about Turkey or the anti-nationalist---hangisi? Aşırı milliyetçi mi değil mi?? magazine that he held in his hand. The magazine is known for its hate speech against the late BBP leader Muhsin Yazıcıoğlu, who was killed in a helicopter crash in 2009.

"As of today, Serkan Tüzün has been dismissed of his role as chairman for the youth branch of the BBP. The party has thought thoroughly and decided to support İhsanoğlu as presidential candidate. This decision was taken after long consultations within our party. It is only normal that different ideas are voiced, yet decisions are taken according to the majority. Therefore, we will stand behind our decision," Destici said, widening the rift between BBP supporters.

Destici's announcement to support İhsanoğlu was later criticized by BBP Vice President Hasan Hüseyin Bozok. In a press conference, Bozok told journalists that he refuted Destici's claims that supporting İhsanoglu was a joint resolution from within the party. "Supporting İhsanoglu was not a decision made as a result of consultation from within the party, on the contrary it was a decision made behind closed doors and it is trying to be imposed on us," he said and added, "An Anatolian does not pursue the CHP ideology. Many of us have thought about resigning from our party, however, this will only hurt our late leader Muhsin Yazıcıoğlu."

Muhsin Yazıcıoğlu, former leader of the BBP died in a dubious helicopter crash in 2009 while traveling from the southern province of Kahramanmaraş to Yozgat in central Turkey. An investigation into the incident is still underway.