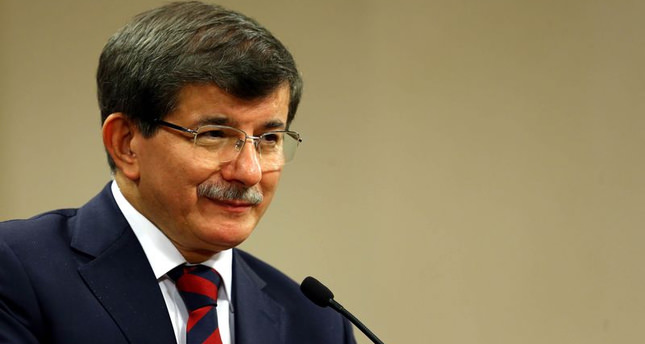 by Daily Sabah Jul 20, 2014 12:00 am
In his response to the main opposition party's reference to the Middle East as a "swamp," Turkish Foreign Minister Ahmet Davutoğlu said Turkey will not allow the "sacred" to be labeled as such and will work day and night to "hold up a huge torch of civilization in the Middle East."

The Turkish government had been receiving calls from opposition circles to stay neutral over massacres in Gaza as Israel expanded its assault with a ground operation, bringing the death toll over 400, including children, women, the elderly and members of the press.

"We're not going to leave the Palestinian cause alone. Apparently, some are asking us to be impartial. Some also ask to stay away from the Middle East 'swamp.' For us, what they call a swamp is the center of sacred revelation. We will not let them call it a 'swamp.' We'll continue to work day and night until colonial powers in the Middle East are removed from the region. With the will of God, we'll hold up a huge torch of civilization in the Middle East," he said during a dinner held by the youth branch of the ruling Justice and Development Party (AK Party) in Istanbul on Saturday.

After the main opposition Republican People's Party (CHP) leader Kemal Kılıçdaroğlu referred to the Middle East as a "swamp," Prime Minister Recep Tayyip Erdoğan accused the CHP leader of being racist. "Calling a region where millions of people live a 'swamp' is racism. As if he [Kılıçdaroğlu] was born in Paris," Erdoğan exclaimed.

Speaking in a televised interview, Davutoğlu said the blockade imposed on Gaza must be lifted. "If a tunnel is closed, an airport has to be opened. There has to be breathing space. The situation now is beyond that of a ghetto," he said.

Efforts to repair the damage had intensified in recent months after Israeli Prime Minister Benjamin Netanyahu apologized for the raid, but hopes of reconciliation appear to be fading, after Erdoğan said Friday that relations between the two countries would not improve while he remained prime minister.

After killing around 300 people in Gaza, Israel's Foreign Minister Avigdor Lieberman on Wednesday accused Turkey and Qatar of sabotaging the ceasefire proposal Egypt drafted for Israel and Hamas earlier this week, in order to promote themselves as mediators. According to a report by the Israeli newspaper Haaretz, Liberman told Norwegian counterpart Borg Brende that Palestine's resistance group Hamas lied when it said Cairo had not sent them the ceasefire proposal, which Israel initially accepted.

"I have never taken the Israeli foreign minister [Lieberman] seriously. How can I take someone who talks about cleansing Palestinians from invaded areas seriously?" Davutoğlu said.

Turkey's Foreign Ministry has forwarded an initiative to put an end to the killing of scores of Palestinian civilians in the Gaza Strip and called for emergency meetings in international organizations, including the U.N.'s related bodies and the Organization of Islamic Cooperation (OIC), to bring an end to the violence.

Hamas has laid out a set of conditions, including the lifting of Israel's eight-year blockade on Gaza, the opening of the Rafah border crossing with Egypt and the release of scores of prisoners Israel re-arrested in recent weeks. Hamas also wants its Turkish and Qatari allies to be involved in any truce negotiations.

"As Turkey, we have several goals. The first is an urgent stop of this [Israeli] aggression. There is no way to explain this massacre of Palestinian women and children. We are determined to [press the] international community to halt this attack," Davutoğlu said.

Israel has been bombing the Gaza Strip, home to about 1.8 million Palestinians, since July 7 with crippling air and naval bombardments with the ostensible aim of halting rocket fire emanating from the strip.

As of Sunday evening, at least 410 people have been killed in the relentless Israeli attacks on the Gaza Strip, Palestinian health officials told the press.