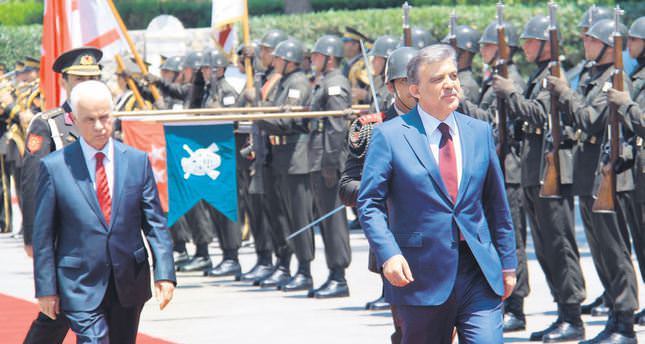 Turkish President Abdullah Gül has called for a resolution to the conflict on Cyprus, as the divided island marked the 40th anniversary of Turkish operations on Sunday. Speaking at an anniversary ceremony in Nicosia, he said, "There are very few conflicts lasting for 50 years in the world. Therefore it is time to resolve this conflict."

Turkish troops arrived in northern Cyprus on July 20, 1974 to protect Turkish Cypriots threatened by a right-wing Greek Cypriot coup. Operation Atilla safeguarded the Turkish population and then the junta collapsed through infighting and political rivalries. Gül said, "Operation Atilla provided freedom to Turkish Cypriots excluded from the country they established and shared with Greeks and let them look to the future with confidence … The date July 20 is a way to remember the strong will [that existed] to protect Turkish Cypriots' ideal of equality, rights, and laws for peace and security. The support given to Turkish Cypriots to proceed toward a bright future will continue. Turkey has stood by you in all circumstances and will continue to do so in the future."

Turkish Republic of Northern Cyprus (KKTC) Presiden Derviş Eroğlu also emphasized that the Turkish peace mission paved the way for permanent peace on the island. He later decorated Gül with a state medal during the visit for his services to the Turkish Cypriot state. Eroğlu recalled the 1974 peace mission as saving Turkish Cypriots from "mass graves and captivity."

The president hoped current U.N.-sponsored talks, as well as practical developments such as a water supply project between Turkey and the KKTC, would bring about a permanent and fair resolution on the island. Gül also mentioned the 2004 vote on reunification that was supported by Turkish Cypriots but voted down by the Greek Cypriot electorate. "We should always remember this incident," he said. "There may be some people who wish to see it disappear from our memories. We should keep our sincerity alive as we wanted to show it at the ballot box."

Turkish Prime Minister Recep Tayyip Erdoğan, sent a letter to Eroğlu promising support and praising Turkish Cypriots' dedication to democracy and rule of law. At a memorial service in Nicosia, Greek Cypriot President Nicos Anastasiades said, "Forty years is enough for everyone. Not only for us but also for Turkey and the Turkish Cypriots to realize that a solution will be to the benefit of all our people."

Cyprus has remained divided into Greek and Turkish sides since a Greek Cypriot coup was followed by a Turkish offensive to aid Turkish Cypriots in the north in 1974. A de facto ceasefire has existed between the two parts since that date. The latest round of negations on the island started in February.

Schulz said following a meeting with Anastasiades. "As the president of the EP, I encourage both sides on the road to a permanent solution," he said. "The resolution should not disregard the EU accession [process], the rights of communities, as well as EU principles and values," the Greek Cypriot leader said, reiterating his commitment to work toward a resolution that would "unify the island, turn Cyprus into a real European country, and offer its people a chance to live together in peace and welfare."

A recent poll conducted between 2009 and 2012 that was published last January by research group Interpeace suggests that support for a reunified Cyprus has declined on both sides. Around 34 percent of Greek Cypriots said in 2009 that they would vote "no" in a referendum while in 2012 this figure rose to 51 percent. Their Turkish counterparts too have seemingly had a change of heart with 42 percent saying they would vote "no" in 2012, an increase from 38 percent in 2009. The island saw U.S. Vice President Joe Biden visit in May, the first involvement by such a senior U.S. official in more than 50 years. U.S. Secretary of State John Kerry is expected to visit the island in the coming weeks.
Last Update: Jul 21, 2014 12:46 pm
RELATED TOPICS