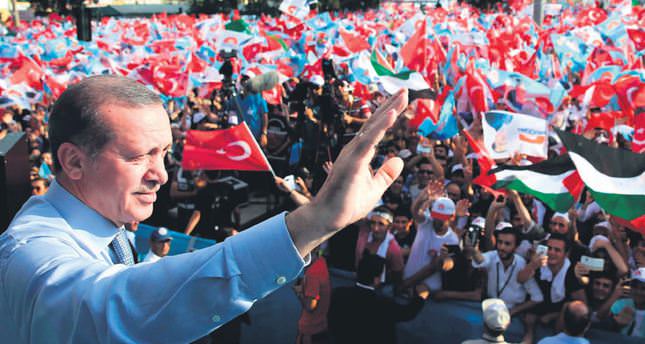 Erdoğan called on people across the world to speak out against Israeli agression despite the fact that many governments across the world support Israel and its campaign in the Gaza Strip, which has killed over 400 people

PrIme Minister Erdoğan, in comments over the weekend, lambasted Israeli attacks on the Gaza Strip. He said he was against anti-Semitism and Hitler as much as the Israeli state's terrorism against innocent Palestinians.

"We are against Hitler's atrocity, but we are also against terror states that follow Hitler's lead," said Turkish Prime Minister Recep Tayyip Erdoğan in his political rally at Turkey's southern city of Hatay.

After Erdoğan's harsh criticism, Netanyahu said that Erdoğan's remarks were anti-Semitic and desecrated the memory of the Holocaust in a
telephone conversation with U.S. Secretary of State John Kerry. On Friday, Psaki said that Erdoğan's statements are offensive and wrong.

Responding to Psaki, Erdoğan yesterday said, "Considering the death toll in Gaza, if the U.S. still asserts that Israel has a right to defend itself, the U.S. should self-criticize. We [Turkey] can never trust the statement that 'The U.S. is an arbiter on this issue' if the U.S. persists on this stance. The U.S. is the one being offensive." Erdoğan added that the U.S., as a member of the U.N. Security Council, should be more impartial on the Israel-Palestine issue.

Referring to Israeli attacks on Gaza, Erdoğan over the weekend said that Israel surpassed Hitler in barbarism, comparing it to atrocities carried out by Adolf Hitler during World War II.

Erdoğan held a political rally in Turkey's northern city of Ordu and made striking remarks regarding Israeli aggression in Gaza. Cursing and attacking the Israeli operation that is killing innocent children in Gaza and expanding the brutalities to the West Bank, Erdoğan stated that Israelis constantly curse Hitler for the Holocaust, but "the terrorist state of Israel" is far beyond Hitler with it atrocities in Gaza.

Erdoğan denounced the Jewish Home Party chairwoman Ayelet Shaked due to her remarks that mothers of all Palestinians should also be killed. Erdoğan said, "What kind of women are you [Shaked]? Why don't women's foundations raise a voice against her remarks? They all share the same mentality. They are against motherhood."

Last week, Shaked quoted the deceased advisor to Netanyahu Uri Elitzur on her Facebook page: "Behind every terrorist stand dozens of men and women, without whom he could not engage in terrorism. They are all enemy combatants, and their blood shall be on all their heads. Now this also includes the mothers of the martyrs, who send them to hell with flowers and kisses. They should follow their sons, nothing would be more just. They should go, as should the physical homes in which they raised the snakes. Otherwise, more little snakes will be raised there."

Referring to Israeli t-shirts with an image of a pregnant Muslim woman and a slogan saying "Kill two with one shot," Erdoğan vehemently condemned those perpetrators and said, "Those perpetrators are inhumane, vile and racist." "Turkey will not remain silent on the ongoing cruelty because a great state does not remain silent and unmoved, but mediates and strives for peace," he said.

Since July 7, Israel has been bombing the besieged Gaza Strip with devastating air and naval bombardment with the ostensible aim of halting rocket fire. At least 410 people have been killed and nearly 2,390 injured in the relentless Israeli attacks, according to Palestinian health officials. Israel stepped up its offensive on Thursday night to include ground operations, sending troops into the embattled coastal enclave.
Last Update: Jul 21, 2014 11:31 am
RELATED TOPICS