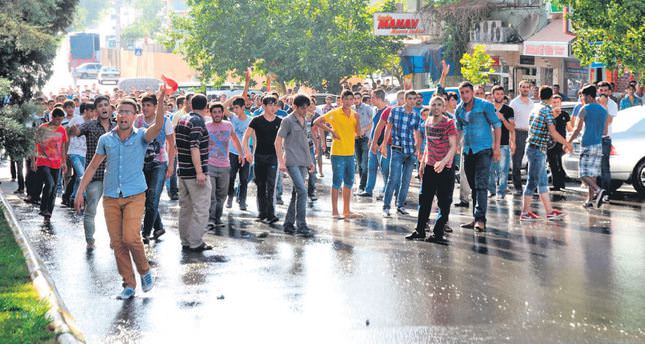 by Zübeyde Yalçın Jul 22, 2014 12:00 am
Renewed protests against the presence of Syrian refugees in Turkey's border cities have exposed a growing crisis in the country that is struggling to handle the stream of Syrians seeking safety. Social unrest is often expected to break out in countries admitting a large number of displaced foreigners in a short period, according to experts, but some now are questioning whether there are other reasons for unrest.

Mahir Ünal, a lawmaker from the ruling AK Party in the southern province of Kahramanmaraş, one of the cities where riots broke out, claims the unrest is the work of those seeking to incite chaos in Turkey ahead of presidential elections. "Those criticizing the presence of Syrians say Turkey should have remained neutral on the Syrian crisis and should not have pursued an open-door policy for Syrians," Ünal said. "But we took our Syrian brothers and sisters in anyway and tried to provide them with as much comfort as they enjoyed back home and everything they needed," he added. Ünal said the opposition was not directed at those staying in camps set up by the Turkish government but rather those living outside the camps. "These people struggle to eke out a living in cities like Kahramanmaraş, Gaziantep, Kilis and Adana on the border. They either have to live in camps or in rented houses. That would certainly lead to some social problems but definitely [attacks] are not the way to respond to Syrians' presence. I think the issue of Syrian brothers provides a fertile ground for those seeking to incite people to take to the streets,"

Ünal said. "We were already aware that a high number of Syrians would be exploited by those seeking to [foment] social unrest to discredit the government but the government successfully handled it," he said. Ünal added that residents in Kahramanmaraş have always been hospitable to foreigners. "The province is known as a hometown of many poets. Poets know well the suffering of those who had to leave their home," he said. On those provoking riots, Ünal said the Kahramanmaraş governorate had information about the identity of perpetrators but those would not be revealed as an investigation is still underway. "Those among the crowd of rioters made grey wolf gesture of idealists. This doesn't make them idealists but it is certain some people's attempt to show it like something the idealists did," he said. He was referring to the Idealists' Club, a far-right wing group in the Nationalist Movement Party.

Mahir Ünal said a group of about 300 people started the riots in Kahramanmaraş and locals backed away from joining the crowd when they noticed the group included "drunks and those not fasting in the month of Ramadan." The lawmaker claimed "circles" which wanted to present a challenge to Prime Minister Recep Tayyip Erdoğan running for president in the August elections, stirred up the unrest. Kahramanmaraş hosts over 15,000 Syrians in a tent camp set up for those fleeing conflict in Syria and a higher number outside the camp.

Complaining that Syrians were committing crimes, a large crowd had taken to the streets and attempted to attack predominantly Syrian neighborhoods and stores operated by Syrians last week. In Gaziantep, a province bordering with Syria, a group of protesters organized themselves on Sunday through a social media campaign and attempted to converge at a square to call for expulsion of Syrians from the city but riot police dispersed the crowd. Twenty people were detained by police when they resisted. Most of the protesters were teenagers.

Gaziantep, located on the border with Syria, has been the site attacks against Syrians in the past, allegedly over an attack targeting Turkish children. Two dozen Syrians had to leave the city after angry Turkish crowds ransacked their homes in May. Speaking at a press conference yesterday, Ali Serindağ, a Gaziantep lawmaker for the opposition Republican People's Party said the province could not handle the high number of Syrians anymore and called for the construction of new camps. "Both Syrians and Gaziantep residents suffer from this issue. Syrians turn to begging or work at immoral jobs.

Their labor is exploited. There are 200,000 Syrians in Gaziantep and about 35,000 stay in camps while the remainder are in the city. We don't know where they stay or how they make a living," he said. He claimed the government failed to maintain order in handling the influx of Syrian refugees.
Gaziantep is struggling to cope with an ever- increasing number of Syrians. About 33,000 Syrians in the province live at three tent camps and a "container city," a site made up of containers converted into housing units. A new tent camp is planned in the province's Islahiye district that already hosts a tent camp which houses over 9,700 Syrians.
Last Update: Jul 22, 2014 11:52 am
RELATED TOPICS