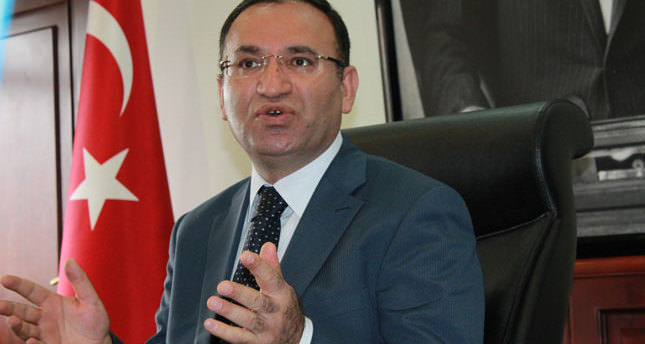 by Daily Sabah Jul 22, 2014 12:00 am
Justice Minister Bekir Bozdağ blasted prosecutor Zekeriya Öz for threatening Prime Minister Erdoğan to death and has called the Supreme Board of Judges and Prosecutors to act against the prosecutor who lost his independence and impartiality. Turkish Justice Minister Bekir Bozdağ harshly criticized prosecutor Zekeriya Öz and called the Supreme Board of Judges and Prosecutors [HSYK] to act against Öz, who threatened Prime Minister Recep Tayyip Erdoğan to death on his Twitter account without citing his name. "No one should desire dictatorship after the last century. His end will be like Saddam and Gaddafi. No matter who adopts lawlessness pays the price," Prosecutor Öz said via Twitter in recent days.

In response to these expressions, Justice Minister Bekir Bozdağ called HSYK to act against Prosecutor Öz. "Would you believe the independence and impartiality of a public prosecutor who threatened the country's prime minister to death without citing his name? Would you believe that this person can be someone who believes in the rule of law?" Minister Bozdağ asked at an iftar dinner organized by Change and Law and Society in Ankara. Zekeriya Öz, is a prosecutor affiliated with the Gülen Movement, who led three investigations on the Dec. 17 operation which the government described as a "dirty plot" against the state, schemed by a "parallel" group of bureaucrats that it said were nestled within the country's key institutions including the judiciary and the police, targeting Turkey's stability and development.

The group, allegedly run by the U.S.-based controversial imam Fethullah Gülen, has been accused of conducting illegal wiretappings of thousands of people in Turkey. The prosecutors who conducted the Dec. 17 operation are accused of acting under the orders of the movement and its coconspirators. Öz was reassigned twice following the probe as part of the government's efforts to weed out Gülenists from the judiciary.

Media reports revealed that Chief Public Prosecutor Zekeriya Öz and his family went on a luxury vacation to Dubai and claimed that the Turkish real estate tycoon Ali Ağaoğlu, who was briefly detained for questioning as part of the Dec. 17 operation, covered travel costs in excess of $40,000. Press reports led the HSYK, Turkey's leading authority on judicial affairs, to initiate an internal investigation to shed light on the prosecutor's ties with the business tycoon.

In May, HSYK, a supreme judicial body that has the mandate to inspect and examine judges and prosecutors in Turkey, approved a request to start an investigation into prosecutors Zekeriya Öz, Celal Kara and Muammer Akkaş and judge Süleyman Karaçöl, but then reversed their decision, saying that it was "unnecessary." Öz is accused of a string of wrongdoings including a vacation financed by a businessman and discrepancies in his finances.

A preliminary investigation by the HSYK inspectors had also looked into accusations that Öz exerted pressure on police officers to continue the Dec. 17 probe. He is accused of forcing police officers not to suspend the Dec. 17 operation using his influence during his visit to Istanbul National Police headquarters on Dec. 19. If the investigation approved by Bozdağ finds Öz guilty of irregularities, he may be ousted from the judiciary or tried by the
Supreme Court of Appeals.
RELATED TOPICS