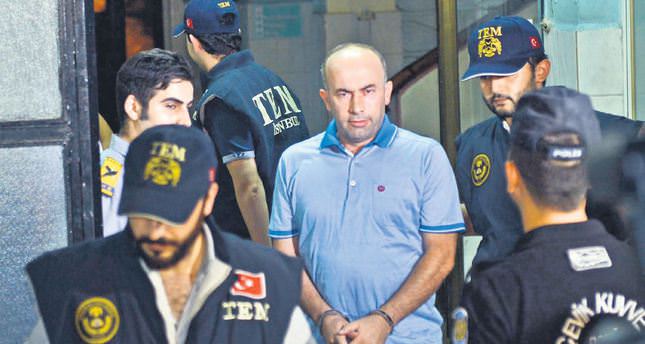 WHILE the investigation into accusations of spying and Gülenist attempts to topple the government has led to the arrest of 104 police officers, officials expect the probe to expand to include others who were involved in the conspiracy

As of Wednesday afternoon, a total of 104 police officers have been taken into custody for attempts to topple the government, spying and harming Turkey's national security. The arrests were made as part of an investigation into members of the Gülen Movement working in the Turkish police and judiciary.

The total number of detainees reached 104 on Wednesday while 13 other officers, who are being served with warrants for their arrest issued by the Istanbul Public Prosecutor's office are still at large. The pre-dawn raid conducted on Tuesday was part of efforts to shed light on Gülen Movement-affiliated police officers and their use of a case opened into a now-defunct "terrorist" organization. It has been reported that officers used the case to launch an ostensibly terrorism-related investigation but in fact went on to wiretap prominent figures in Turkey.

According to the reports, officers affiliated with the movement wiretapped and issued arrest warrants for 251 people, including Prime Minister Recep Tayyip Erdoğan, Daily Sabah's Editorin-Chief Serdar Karagöz and Daily Sabah's Ankara correspondent Ali Ünal, for being members of the "Tawhid-Salam" organization.

The prosecutor's office previously ruled there was a "lack of grounds for legal action" and dismissed charges against 251 people who were accused of being members of Tawhid-Salam.

The scope of the operation was significantly widened throughout Tuesday when more officers around the country were faced with search and seizure orders and detained, while some of them were brought to Istanbul. Amongst those arrested were Yurt Atayün, former Director of the Counterterrorism Department and his assistant Ömer Köse as well as Ramazan Akyürek who was the president of the Chief Inspection Board of the Turkish National Police.

According to Ahmet Taşgetiren, a columnist at the Turkish daily Star, ongoing investigations have revealed that the Gülen Movement operates in a different sphere from the legitimate hierarchy of the state and paid allegiance to an actor outside the state. "The failure to notice the illegitimate structure within security forces may have led the police department to perform in a corrupt manner and ultimately deceive justice," remarked Taşgetiren, who said such an environment would easily lead to the spread of provocation and unrest, while adding that Turkey was still feeling the pain caused by actions of Gülen Movement members. More importantly, he said that it may have resulted in a system of judicial/security tutelage which would not be accepted by any state in the world.

In response to a question about the failed coup attempts by the movement, Taşgetiren said that the state has started to purge Gülen Movement agents within state institutions while noting that operations will be reviewed by the judiciary in upcoming days. He said that there are serious allegations including spying and wiretapping of top government officials while adding that the movement's scope of influence extends to a number of institutions and the government is taking serious steps toward purging them. For instance, the National Education Institutions, Turkey's Scientific and Technological Research Council, municipalities and other departments in the government are going through a phase of restructuring, which, according to Taşgetiren, may take some time. Many argue that the sole purpose of the Gülen Movement and their wiretappings was to suppress dissent and throw into prison those who do not share their views in order to topple the democratically elected government.

Fethullah Gülen, who currently lives in the U.S. in self-imposed exile leads the Gülen Movement, which operates in hundreds of countries across the world. The organization maintains a number of charter schools and other activities, and their activities have been subject to government scrutiny in Azerbaijan, Russia, Germany, U.S. among other countries. They are currently accused of infiltrating Turkish state institutions to establish a "parallel state" loyal to Gülen. The movement on the other hand denies these claims and has radically changed its political stance since the government proposed closing prep schools in Turkey, which are mostly operated by the Gülen Movement. Many contend that the movement is now allied with and supports the main opposition Republican People's Party (CHP), which previously persecuted revered Islamic scholar Said Nursi, who Gülen
claims to base his ideology on.
Last Update: Jul 24, 2014 12:03 pm
RELATED TOPICS