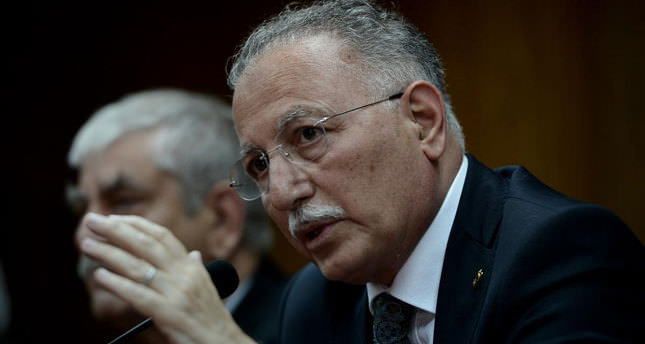 A group of women protested against the opposition Republican People's Party (CHP) and Nationalist Movement Party (MHP) joint presidential candidate Ekmeleddin İhsanoğlu's statements regarding abortion on Tuesday at an iftar event in the western city of İzmir.

Several women from the Turkish People's Houses tried to unfurl a protest banner following İhsanoğlu's speech at the event. It was reported that the group protested İhsanoğlu, who is the former secretary-general of the Organization of Islamic Cooperation (OIC), by alleging that he is a "misogynist."


One of the protestors, Gizem Coşkun, accused İhsanoğlu of attacking women's abortion rights due to his remarks that no one has right to claim a life given by God.

"Religion is the belief of people, we cannot bargain with it. If you have a religion, you will act in accord with it. If you are a believer, there is criteria in religion regarding abortion," said İhsanoğlu in an interview with the Gülen Movement-affiliated daily Taraf.

Meanwhile, CHP Vice Chairman and Yalova Deputy Muharrem İnce on Tuesday said that he does not approve of İhsanoğlu. Addressing citizens in his political rally, İnce said, "You can say that I do not approve of İhsanoğlu. But we did not nominate him for leftists voters. We nominated him [to receive supports of] a broad range of voters. At the beginning, I was opposed to it, but this [voting for İhsanoğlu] is the only way to save the country, we have to do this."

İnce urged citizens -who will be on holiday during the presidential election to be held on Aug. 10- to go to the ballot box. On June 25, İnce made remarks on the joint candidacy and stated his opinion on the joint candidate, claiming he was not consulted in the nomination process and added that he reproached Kılıçdaroğlu over the issue. "I did not contribute to the process of candidate nomination. Our party leader [Kılıçdaroğlu] announced the joint candidate [İhsanoğlu] after he spoke with other party's leader [MHP leader Devlet Bahçeli]. The only duty that I have is to work for our joint candidate. I will do my best to win over [Turkish Prime Minister] Recep Tayyip Erdoğan."

Aug. 10 will be a milestone for Turkish politics. Three candidates, Erdoğan, İhsanoğlu and Selahattin Demirtaş, will compete with each other for the presidential chair. People will go to polls for the first time to elect their president. The people of Turkey voted for their right to elect their president in a 2007 referendum.
Last Update: Jul 24, 2014 1:39 pm
RELATED TOPICS