Clamp down on Gülenists to continue, focus on judiciary 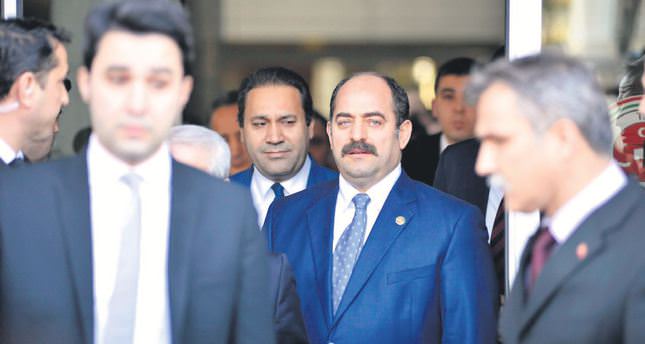 With over 100 police officers in custody for their involvement in the coup attempt against the elected government, the criminal investigation will turn its focus to suspects in the judiciary

Operations against the movement led by controversial U.S.-based imam Fethullah Gülen will widen to target the movement's members who infiltrated judicial bodies following the recent detentions of over 100 police officers. According to a report by the Turkish newspaper Sabah on Wednesday, Gülenist prosecutors and judges who became involved in illegal activities, including coup attempts against the elected government on Dec. 17 and 25, spying on state institutions and threatening state security, will be the first targets of the upcoming operations. A dawn raid on Tuesday, in which numerous senior and former policemen were arrested, was part of efforts to determine who the Gülenist officers are. The raid was also carried out to shed light on an investigation into a now-defunct "terrorist" organization which was used to wiretap prominent figures in Turkey.

As of Wednesday afternoon, a total of 108 police officers were taken into custody on charges of illegally wiretapping thousands of journalists, politicians, academics and other prominent figures.

The arrests were made as part of an investigation into members of the Gülen Movement working in the Turkish police and judiciary. Arrest warrants have been issued by the Istanbul Public Prosecutors' Office for other nine officers who went missing after the raids.

According to reports, officers affiliated with the movement wiretapped and issued arrest warrants for 251 people, including Prime Minister Recep Tayyip Erdoğan, Daily Sabah's Editor-in-Chief Serdar Karagöz and Daily Sabah's Ankara correspondent Ali Ünal, for being members of the "Tawhid-
Salam" organization. The prosecutors' office previously ruled there was a "lack of grounds for legal action" and dismissed charges against 251 people who were accused of being members of Tawhid-Salam.

It is now being reported that the government's fight will turn to Gülenists in the judicary, as well as prosecutors who ruled there was "lack of grounds for legal action" in nine cases opened against Gülen. These prosecutors are accused of avoiding a detailed investigation into cases against Gülen.

Many are reportedly followers of Gülen as well. The second part of the operation will target Istanbul's specially authorized prosecutors Sadrettin Sarıkaya and Bilal Bayraktar, who issued an arrest warrant for Hakan Fidan, the head of the National Intelligence Organization (MİT), accusing him of espionage and holding meetings with PKK leader Abdullah Öcalan and other PKK members.

The connection between prosecutors Zekeriya Öz, Muammer Akkaş and Celal Kara, the three major planners of the Dec.17 and 25 operations, will also be investigated thoroughly. The fourth target is Öz himself, who is accused of coordinating fellow Gülenist prosecutors at the Istanbul Court House. Recently, Justice Minister Bekir Bozdağ criticized prosecutor Öz for threatening Erdoğan to death and has called the Supreme Board of Judges and Prosecutors (HSYK) to act against the prosecutor who lost his independence and impartiality. Öz threatened Erdoğan to death on his Twitter account without citing his name. "No one should desire dictatorship after the last century. His end will be like Saddam and Gaddafi. No matter who adopts lawlessness pays the price," Öz said via Twitter.

Media reports revealed that Öz and his family went on a luxury vacation to Dubai and claimed that the Turkish real estate tycoon Ali Ağaoğlu, who was briefly detained for questioning as part of the Dec. 17 operation, covered travel costs in excess of $40,000 (TL 83,600). Press reports led the HSYK, Turkey's leading authority on judicial affairs, to initiate an internal investigation to shed light on the prosecutor's ties with the business tycoon.
The fifth target of the judicial clamp down will involve Adana public prosecutor Aziz Takçı, who issued a warrant to search three MİT trucks carrying humanitarian aid to Syria on Jan, 19. MİT officials were mistreated, assaulted and handcuffed by security units who received orders to carry out the raid from Takçı.

Lastly, HSYK members who backed Gülenist prosecutors will also be an important part of the investigation into Gülenist infiltration of the judiciary.
In his first reaction to the raids - in which over 100 officers have been taken into custody for illegal wiretapping - Prime Minister Recep Tayyip Erdoğan hinted that the probe into the Gülen movement will widen. "We are currently watching. We will all see what will come out of this," he told reporters at the Turkish Parliament. Asked if the drive to purge Gülenists from the state apparatus will be expanded, he replied "It looks like it will, of course, of course." In a television interview on Monday, Erdoğan vowed that the fight against the Gülen Movement would continue "nonstop" while calling on the U.S. to extradite the self-exiled imam. "I expect the U.S. to take a stance on the Gülen issue," Erdoğan said.

After 11 years in power which has seen his government tame the influence of the once-powerful military, Erdoğan has declared a war against Gülen, accusing him of running a "parallel structure" placed within the state. Erdoğan also accused the movement of being behind a series of recordings posted on the Internet suggesting the prime minister and his family members were engaged in corruption. The Scientific and Technological Research Council of Turkey issued a report on the recordings, stating that the tape recordings posted on social media platforms allegedly belonging to the prime minister and his family, were fabricated by electronically cutting and pasting different syllables from different speeches under a single pool of voice recordings.

Furthermore, 40 police officials allegedly having ties to the Gülen Movement have recently been dismissed from their profession based on a decision by the Interior Ministry's Supreme Disciplinary Board after the Dec. 17 attempt to topple the government. According to reports, the highest amount of dismissals took place in Mersin with 20 police officials including Ali İhsan Kaya, the former director of intelligence.

Efkan Ala, the interior minister has stated that Mersin Police Department wiretapped the governor, security director and political party leaders in the city for a period of six months. "This unlawful gang has conducted the wiretappings to redesign politics in the city in cooperation with their partners" said Ala, who condemned the incident.
RELATED TOPICS