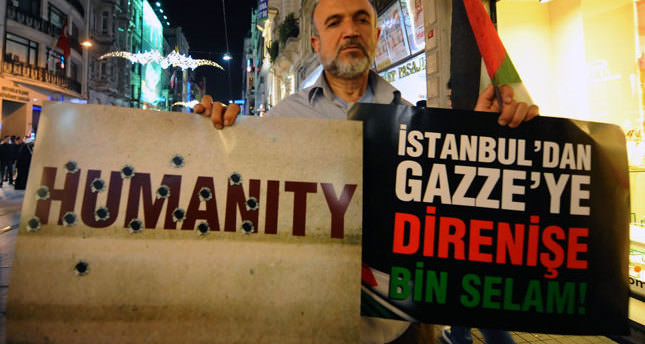 by Daily Sabah Jul 25, 2014 12:00 am
The Turkish Cooperation and Coordination Agency, per Prime Minister Erdoğan's instructions, has distributed 15,000 food parcels to the beleaguered population of the Gaza Strip.

Turkey continues to help the destitute and the needy in the war-torn Gaza Strip, where over 730 people have been killed and over 4,600 wounded by Israeli forces in the past two weeks. The Turkish Cooperation and Coordination Agency (TİKA), based on orders from Prime Minister Recep Tayyip Erdoğan, is currently distributing food and other humanitarian supplies. They have recently distributed 15,000 food packages and 15,000 meals while water and sanitation projects as well as education, health care, orphanage and infrastructure projects are underway along with others to respond to the ongoing humanitarian crisis.

Throughout the month of Ramadan, 15,000 fast-breaking meals were distributed by TİKA to the people who escaped their homes in the Shujaya, Tuffah, and Zeytun neighborhoods in Gaza due to indiscriminate Israeli attacks from the air, land and sea and took refuge in schools belonging to the U.N. Relief and Works Agency for Palestine Refugees. It was reported that the distribution of meals will continue until the end of Ramadan.
According to reports by TİKA, the agency started to make contacts with officials in TİKA's Gaza and Palestine office on July 9 to determine the situation following the Israeli air strikes that started on July 8. Accordingly, they said that the developments are constantly being watched while the agency's Gaza office is responsible for distributing food and humanitarian aid supplies. For instance, 15,000 families have received a food package containing basic necessities such as rice, sugar, flour, and oil in Rafah, Gaza and Khan Younis. Likewise, TİKA has delivered four generators to Gaza, whose infrastructure has been heavily struck by attacks in past years.

In addition, TİKA has been involved in water and sanitation projects to provide drinkable water to the people of Gaza. Accordingly, 15 wells have been built by the agency while 15 have been rehabilitated. Ten desalination units have been constructed along with the construction of rainwater collection networks and 14 generators have been delivered for the wells and water tanks. A total of 30 kilometers of water pipes have been installed and a 6-kilometer-long sewer line was constructed as well, allowing over 900,000 people in Gaza to have access to clean water. In addition to these, seven water wells are still under construction.

Other projects carried out by TİKA in Gaza include education initiatives, orphanages, health projects, the rehabilitation of those disabled as a result of the war, support for administrational infrastructure, and restoration and agricultural projects.

The agency has been involved in repairing two universities and their laboratories as well as providing necessary equipment and establishing libraries. Three orphanages have been constructed in Gaza while hospitals have received medical equipment and five ambulances. The 150-bed capacity Palestinian-Turkish Friendship Hospital, which will be completed soon, will be the largest hospital in Gaza. Likewise, around 100 people who have been wounded as a result of Israeli attacks were brought to Turkey to receive medical treatment and 400 people who were disabled by the war have been rehabilitated. Agricultural projects have also been supported by efforts to rehabilitate farmland in Gaza, which has largely been destroyed by Israeli attacks.

Turkey has increased its Official Development Assistance (ODA) by 30 percent in the last decade to reach more people in need throughout the world. Beginning with emergency aid, Turkey also advanced its aid activities from basic-needs projects to the preservation of cultural assets and developmental assistance. TİKA conducts leading projects around the world and aims to respond to the urgent needs of those struck by war in Gaza.
Last Update: Jul 25, 2014 11:59 am
RELATED TOPICS