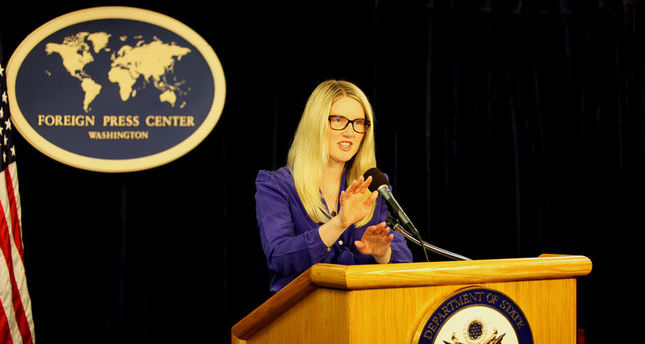 by Daily Sabah with Agencies Jul 25, 2014 12:00 am
As the continued Israeli assault on the Gaza Strip pushed the Palestinian death toll to above 800, the U.S. State Department said Turkey can play a key role in arranging a cease-fire between Israel and Hamas.

Deputy State Department spokeswoman Marie Harf told journalists that Secretary of State John Kerry has regularly been in contact with Turkish Foreign Minister Ahmet Davutoğlu in an effort to end the bloodshed in Gaza.

She said, "The Turkish foreign minister is a key player in the region and has some leverage he can bring to bear on the situation. They have a relationship with Hamas. I mean, they can, you know, have conversations that we can't."

Kerry and Davutoğlu spoke three times on Thursday, Harf added. She declined to give details about the discussions. "Turks have a role to play," Harf said in response to a question regarding Kerry's close consultation with Turkey.

Later on Friday, the Turkish foreign minister flew into Qatar amid mounting U.S. calls on the two Western allies to use their influence with the Palestinian resistance group Hamas to end bloodshed in Gaza.

Kerry, who has been spearheading Western efforts to end the Palestinian territory's deadliest violence since 2008-2009, has repeatedly telephoned both Qatari and Turkish leaders in an effort to broker a truce.

"I am in Qatar for Gaza cease-fire negotiations that have intensified for a couple of days and not stopped in the last 24 hours," Davutoğlu wrote on his official Twitter account.

"I will hold detailed meetings with our Qatari friends, who have been making great efforts together with us to stop the bloodshed in Gaza," he added.

Davutoğlu scrapped a scheduled visit to France to hold crisis talks with Turkey's key partner and back Hamas in its refusal to accept a cease-fire without concessions from Israel.

Hamas has been demanding the Israelis commit to easing the eight-year-old Israeli blockade of Gaza and release re-arrested Palestinian prisoners as a condition for a cease-fire.

Turkish media said that while in Qatar, Davutoğlu is scheduled to meet with Hamas leader Khaled Meshaal, who is based in its capital Doha and who reiterated the Islamist movement's truce conditions late on Wednesday.

"We are doing our best for a cease-fire but I don't know if we will get any result," one unnamed Turkish official said.

On Twitter, Davutoğlu said without elaborating that he would hold talks with "Palestinian parties with the aim of ensuring that merciless attacks targeting our Palestinian brothers come to an immediate end."

Turkey, a staunch critic of the Israeli assaults in Gaza, is pressing for Hamas to be involved in any negotiation for a cease-fire.

Turkish Prime Minister Recep Tayyip Erdoğan, who is recognized as a rare global Muslim leader who stands up for Palestinian rights, has accused Israel of carrying out a "genocide" in Gaza.

Turkish and Qatari criticism of Egyptian-led efforts for a truce have seriously complicated U.S. efforts to broker an end to the violence that has killed more than 800 Gazans, many of them civilians, sparking a mounting world outcry.