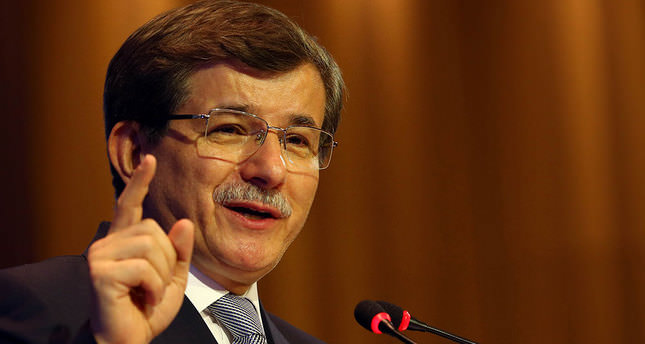 by AA Jul 26, 2014 12:00 am
Turkish Foreign Minister Ahmet Davutoğlu has welcomed a 12-hour humanitarian truce in Gaza but slammed the Israeli government as being "disingenuous" about peace efforts.

Davutoğlu's comments came on Saturday after he travelled to Qatari capital Doha the day before to broker a ceasefire deal.

Davutoğlu, his Qatari counterpart Khalid bin Mohammed Al Attiyah and Hamas leader Khaled Mashal worked on a ceasefire deal but it was rejected by the Israeli government in the early hours of Saturday.

Following the collapse of the proposal, Israel and Palestinian resistance factions reached an agreement - proposed earlier by United Nations Secretary-General Ban Ki-moon - for a 12-hour lull in the conflict for humanitarian reasons.

On his Twitter account, Turkish FM Davutoğlu welcomed the temporary truce, but added: "If the Israeli side expressed consent to the joint text reached after day-long negotiations with the Palestinian side in Qatar yesterday, we could have been discussing a more solid ceasefire.

"Israel's stance clearly indicates how disingenuous they are about the peace efforts."

International talks aimed at reaching a longer truce are set to resume in the French capital of Paris. Davutoğlu initiated talks with US Secretary of State John Kerry at the US Embassy in Paris on Saturday.

Foreign ministers of the UK, Italy, Germany and Qatar alongside Turkey and the US as well as EU foreign policy chief Catherine Ashton will discuss a seven-day-long ceasefire, according to diplomatic sources.

At least 975 Palestinians have been killed-mostly civilians-and more than 5,900 others injured in Israel's ongoing offensive, now in its third week.

According to official Israeli figures, 40 Israelis-37 soldiers and three civilians-have been killed since hostilities began.